17 Years Of Arya: COVID-Positive Allu Arjun Calls It The “Greatest Miracle” Of His Life – Unblendednews
Skip to content
Trending Stories

Allu Arjun’s 2004 film Arya completed 17 years of its release today. Arya was Allu Arjun’s breakthrough in the Telugu film industry and hence the occasion is indeed special for him. On Friday, Allu Arjun posted a heartfelt note on Twitter while remembering the 2004 movie. He tweeted, “17 years of Arya today” and posted a picture on the micro-blogging platform in which we see him as Arya the college student, a role he played in the movie. Allu Arjun as Arya can be seen holding a red rose. In his note, Allu Arjun called Arya, the “greatest miracle” of his life.

Quoting the lines from the song Feel My Love from Arya, Allu Arjun shared that the audience loved when he had said – ‘Feel my love’. He called this line “golden words” in his tweet. We are guessing that the actor was probably talking about the reaction of the audience in theatres during the release of Arya back then.

“It’s 17 years of Arya today. It is the single most changing experience of my life. It’s still the greatest miracle in my life. LOVE from the audience started showering on me after I said those golden words, “Feel my love,” he tweeted.

The Arya actor also shared another note on Twitter while expressing gratitude for his fans. In his statement, he remembered Sukumar, Dil Raju, Devi Sri Prasad and R Rathnavelu, who worked as the director, producer, music composer and cinematographer in the 2004 film respectively. The statement read, “This Movie changed the lives of soo many people. It changed my course as an actor, Sukumar garu’s life as a director, DIL Raju garu’s life as a producer, DSP’s life as a Musician, Rathnavelu garu as a DOP, Bunny Vasu as Distributer then and many, many more Lives. We all the soo thankful to this one magic that came into our lives called ARYA We all will always cherish this as our greatest milestone in our lives. Thank you! Gratitude forever (sic),” he added.

Allu Arjun, who has been recovering from COVID-19 at home, also watched Arya on the occasion after the gap of “13 years.” Nostalgic Allu Arun posted a glimpse of his movie time on Twitter and wrote, “Watching Arya after 13 years almost. Every shot has taken to back to those times. Nostalgia.

Take a look at the video here:

Watching Arya after 13years almost . Every shot has taken to back to those times. Nostalgia pic.twitter.com/XRnA8JYP8N

The film received a positive response at the box office back then. 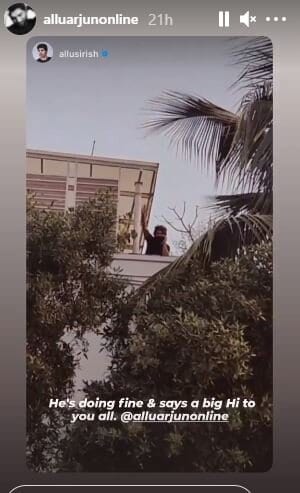 Allu Arjun had tested positive for coronavirus in April.

Allu Arjun made his debut as a lead actor with Gangotri in 2003. He was last seen in Ala Vaikunthapurramuloo in 2020 and is gearing up for the upcoming film Pushpa.