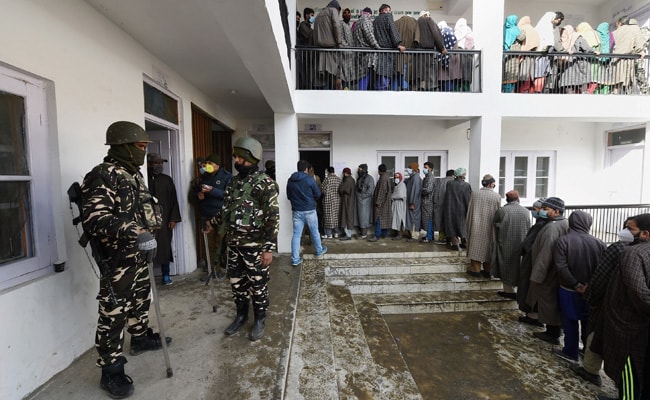 The first DDC elections in Jammu and Kashmir are being held in eight phases.

Braving sub-zero temperatures, a large number of women and men came out to vote.

At Kralpora in Kupwara district, a constituency reserved for women, nine women candidates were in the contest and drew a large number of woman voters to polling booths.

This is the first election in Jammu and Kashmir after the union territory was stripped of its special status and statehood in August last year. In 2018, panchayat and local body elections were boycotted by regional parties. Today, all of them including the National Conference and People’s Democratic Party (PDP) are fighting together as part of Gupkar Alliance. The voters say besides development, political ideology is also at the core of their voting choices.

“Our issue is restoration of Article 370. We also want development,” said a voter. He said in people wanted opportunities for the youth in far-flung areas.

The first DDC elections are being held in eight phases. There are 280 seats in 20 districts in Jammu and Kashmir. Saturday’s polling was held for 43 seats. While polling in some areas of Pulwama was not so high, the turnout across regions was quite high.

The polling went off peacefully and there was no incident of violence and disturbance.

Many believe the first election after scrapping of provisions of Article 370 was more than just voting and poll percentage in Jammu and Kashmir. It was a revival, in ways, for mainstream politics which has been marginalised and undergoing turbulent times.

Campaigning for the first phase came to an end on Thursday, with elaborate arrangements were made for the smooth conduct of the democratic exercise, especially in view of the COVID-19 pandemic, officials said.