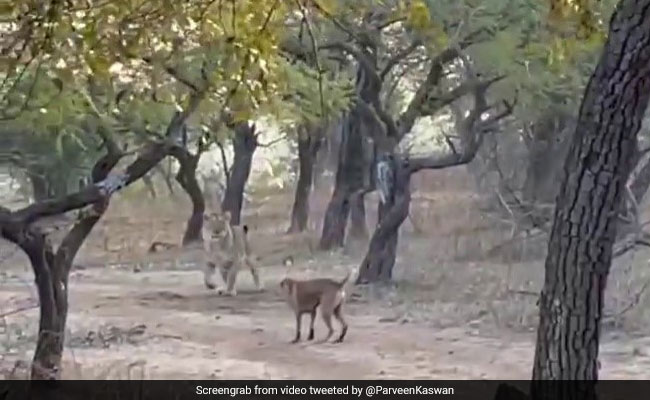 A dog takes on a lioness in this jaw-dropping video.

A jaw-dropping video that has gone viral online shows a fearless dog fighting a lioness. A video of the unusual fight was shared on Twitter by Indian Forest Service officer Parveen Kaswan. In the one and a half-minute-long clip, the lioness was seen chasing the stray dog as tourists on a jeep watched from a short distance away.

The video shows the dog barking furiously while running. Eventually, a fight broke out between the two animals from which the canine managed to walk away miraculously unscathed. As the lioness tried to approach it again, the dog charged and her, again barking loudly. It finally forced the big cat to retreat and was then filmed running away from the scene.

“Need this much confidence in life. Dog vs Lion,” wrote Mr Kaswan while sharing the clip. He also said that the encounter “highlights issue of stray dogs and wildlife interaction”.

“Lion just used as indicative. It’s a lioness to be precise,” Mr Kaswan clarified in the comments section.

Need this much confidence in life. Dog vs Lion. It also highlights issue of stray dogs & wildlife interaction. @zubinasharapic.twitter.com/lNu7X4ALm5

The footage has been viewed over 1.6 lakh times on the microblogging platform, collecting a ton of amazed reactions.

While some commented on the surprising outcome of the fight, others tweeted about the unusual nature of the encounter and the issue of stray dog and wildlife interaction that Mr Kaswan had touched upon.

This is one of the craziest moment in natural history! Dog challenges lion and survives!

Is that dogs show more courage when humans are around? @ParveenKaswan

What people are saying in background is hilarious ???? @zubinashara

Last year, a video of honey badgers fighting a pride of lions had gone viral on social media. Despite being outnumbered by animals much larger than themselves, the honey badgers were filmed winning the battle and forcing the big cats to retreat.