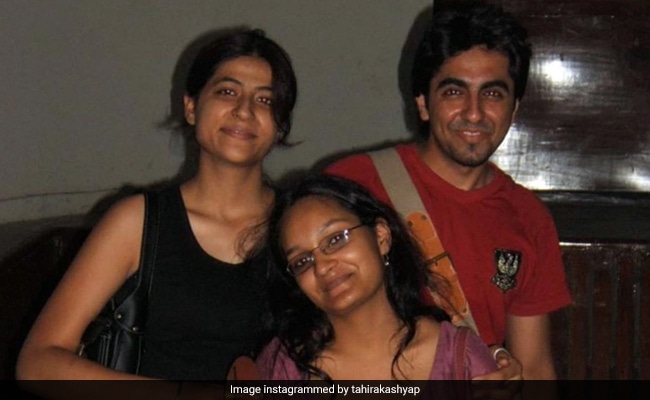 Our day couldn’t get any better as we chanced upon a million-dollar throwback picture of actor Ayushmann Khurrana and his wife, author Tahira Kashyap, from their college diaries. On Sunday, Tahira Kashyap took a trip down memory lane and shared a picture of herself, the actor and their friend Manisha Pande from when they were college students. She accompanied the epic photo with an equally epic caption that stole the show on the Internet. ICYDK, Ayushmann Khurrana and Tahira are high school sweethearts. They have been together since 2001. Sharing the throwback, Tahira wrote: “The days of red eyes, CD’s, collarbones, self stylised fringes (called flicks back then), never ending giggles and constant butterflies in the stomach! #college #theatre #collegelife.”

In the old picture, Ayushmann can be seen sporting a red t-shirt and carrying a side bag. Tahira looks pretty in a black top and denims. She can be seen holding a CD in her hand.

Ayushmann Khurrana and Tahira Kashyap got married in November 2008 after dating for several years. The duo often paint Instagram red with their adorable posts for each other. Recently, the couple celebrated their 12th wedding anniversary. On the occasion, the actor posted a heart-warming picture with Tahira and wrote: “Celebrating 125 years of togetherness. May be more. Coz I know that I know you from centuries and time immemorial. This bond can’t be limited to this lifetime. You’re my companion, lover, personal stand-up comedian, life coach and above all my best friend. I want to grow old with you. I know it’ll be a lot of fun. Sigh. Happy anniversary, Tahira Kashyap.”

Remember the post in which Ayushmann called Tahira his “high school sweetheart”? Take a look:

Ayushmann Khurrana and Tahira Kashyap are parents to a son named Virajveer and daughter Varushka.