Arvind Kejriwal meeting the protesting farmers at the Delhi-Haryana border in Singhu on Monday.

Delhi Chief Minister Arvind Kejriwal has been placed under “house arrest” by the police ever since he met with the protesting farmers yesterday and has been forced to cancel his meetings, the ruling Aam Aadmi Party (AAP) alleged today. The Delhi Police denied the charge.

The party alleged that the Chief Minister was deliberately blocked because of the Bharat Bandh called by farmers protesting against the central government’s new farm laws.

Later in the day, Mr Kejriwal sent out a message saying, “I am glad Bharat Bandh was successful. I prayed for protesting farmers while sitting inside,” according to a PTI report. “If I wasn’t stopped, I would have gone and supported farmers in their Bharat Bandh call,” he said.

The Chief Minister’s message came at the end of a day full of drama sparked by AAP’s allegation against the police.

“When our MLAs went to meet the chief minister they were beaten and thrown on the streets. The party volunteers were also not allowed to meet,” AAP spokesperson Saurabh Bhardwaj claimed at a press conference today.

Delhi Police Deputy Commissioner for North District, Anto Alphonse, dubbed the allegations “lies” and “baseless”. “We are alert. Arvind Kejriwal left home at around 8pm yesterday and returned around 10pm. There is no issue at all,” Mr Alphonse said.

This claim of CM Delhi being put on house arrest is incorrect. He exercises his right to free movement within the law of the land. A picture of the house entrance says it all.@DelhiPolice@LtGovDelhipic.twitter.com/NCWBB9phDS

In the afternoon today, Deputy Chief Minister Manish Sisodia arrived outside Mr Kejriwal’s residence. Speaking to mediapersons, he alleged that the Chief Minister was being mistreated by the central government for having denied permission to use stadiums to jail protesting farmers.

Held up by barricades, Mr Sisodia claimed the police were not allowing AAP workers or leaders to enter the residence. “Now, public is not being allowed to meet him (Mr Kejriwal). Does this mean he is under house arrest? Why are all these security personnel posted here?” Mr Sisodia asked, according to an ANI report. 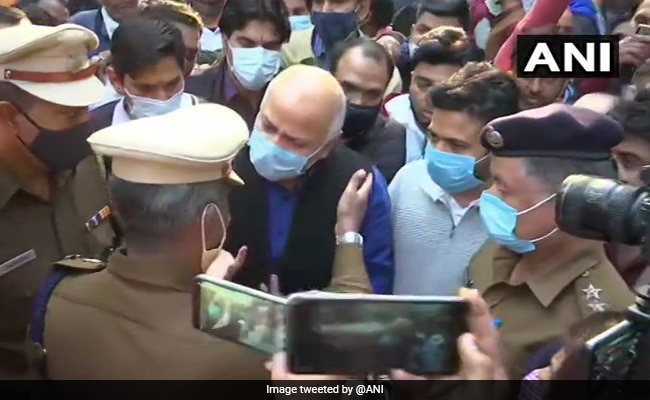 Shortly after, he along with a big group of AAP supporters squatted on the road, raising slogans demanding the “release” of Mr Kejriwal.

A little while after this sit-in protest, the police allowed Mr Sisodia, along with others AAP leaders and workers, to enter the Chief Minister’s residence through an alternative entrance. This was done to avoid a confrontation between the AAP group and some BJP workers who had been protesting at the main entrances, the police said.

Earlier, AAP alleged that Delhi Police, on orders from the Union Home Ministry, got the three mayors of the city’s various civic bodies to protest in front of the Chief Minister’s home and used it as an excuse to block the exits. Mr Kejriwal’s residence has been barricaded completely, with none allowed to enter or leave the premises, AAP claimed.

All of his official meetings have been cancelled for the day given the circumstances, AAP leaders said.

Mr Kejriwal had visited the Singhu border point between Delhi and Haryana on Monday to meet the protesting farmers and review arrangements for them. Thousands of farmers have been parked there, along with other border points with Delhi and other states, in protest against the central government’s farm laws passed in September.