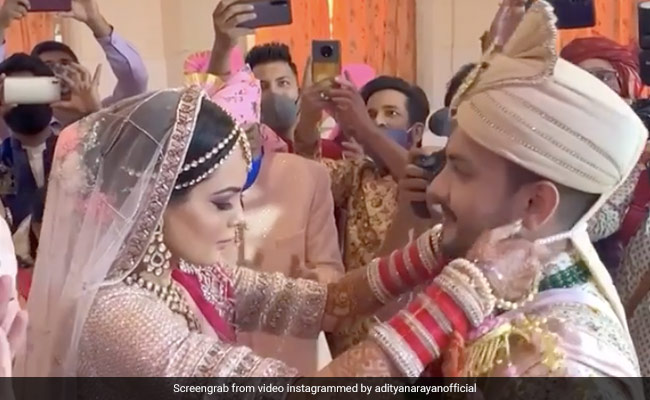 Singer Aditya Narayan, who married his Shaapit co-star Shweta Agarwal on Tuesday night, shared his first post after his wedding. In the picture, the newlywed couple can be seen flashing ear-to-ear grins. The picture appears to be from the couple’s wedding festivities, in which they can be seen dressed to perfection. Aditya can be seen wearing a brown kurta, while Shweta looks elegant in an orange outfit with ruffled sleeves. She can be seen sporting minimal make-up and she accessorised her look with a necklace. He simply added a couple with heart emoji. No caption needed. He also posted a video from the Jaimala ceremony, adding a meme to it, which featured Amitabh Bachchan’s clip from a film, where he can be heard saying: “They have done it. Our boys have reached.” He captioned the post: “Video edit courtesy idiot best friend Anupam Saroj, featuring GOAT Amitabh Bachchan.”

Aditya Narayan and Shweta got married in a close-knit ceremony in Mumbai on Tuesday. The ceremony was attended by their family and friends. For their big day, Aditya was dressed in a cream sherwani, while the bride wore a pastel lehenga. Here are some pictures from the wedding:

Aditya and Shweta announced their wedding in November and here are some pictures from their pre-wedding ceremonies:

Aditya Narayan, son of playback singer Udit Narayan and Deepa Narayan, is a singer too and he has also hosted several singing reality shows such as Sa Re Ga Ma Pa Challenge, Rising Star 3 and Entertainment Ki Raat, among others. He is currently seen hosting the 12th season of the singing reality show Indian Idol, which is judged by Neha Kakkar, Vishal Dadlani and Himesh Reshammiya. He made his acting debut with the film horror film Shaapit, where he met his wife Shweta Agarwal.