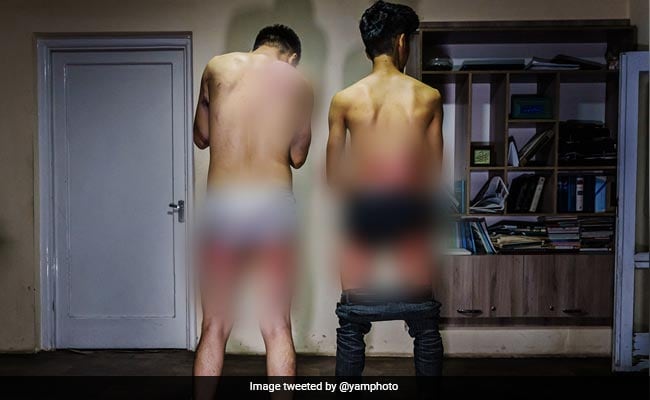 Distressing images of journalists displaying injuries sustained after being beaten by the Taliban have underlined global concerns over the hardline Islamist group, and its ability to deliver on promises to protect human rights and guarantee freedom of press as it forms a new Afghan government.

At least two such images have surfaced in the aftermath of the group announcing that government and and have been shared by verified Twitter handles, including in one post by Marcus Yam (a foreign correspondent for the Los Angeles Times) and in another by Etilaatroz (an Afghan news publication).

Images tweeted by Mr Yam show two men stripped to their innerwear and standing with their backs to the camera. Their backs and legs are covered with what appear to be red welts and bruises.

Painful. Afghan journalists from @Etilaatroz, Nemat Naqdi & Taqi Daryabi, display wounds sustained from Taliban torture & beating while in custody after they were arrested for reporting on a women’s rally in #Kabul, #Afghanistan.#JournalismIsNotACrimehttps://t.co/jt631nRB69pic.twitter.com/CcIuCy6GVw

Images tweeted by Etilaatroz show the same two men, whom the publication has identified as its employees – Taqi Daryabi and Nematullah Naqdi – and a close-up of their injuries.

According to Etilaatroz, Mr Daryabi and Mr Naqdi – a video editor and a reporter – were covering a protest led by women in the Kart-e-Char area of western Kabul yesterday, when they were abducted by the Taliban, taken to different rooms and beaten and tortured.

“We were shouting that we are journalists. But they didn’t care,” Mr Naqdi was quoted by the LA Times, “I thought they were going to kill me. . .They kept on ridiculing us…”

According to the LA Times the Taliban also stopped its journalists from photographing the protesting women; the foreign correspondents, however, were only forced to leave the area.

Etilaatroz also reported that three other journalists, including the local head of Euronews, a pan-European TV news network headquartered in France, were also abducted.

They were later released unharmed.

An extensive report by the Committee to Protect Journalism (CPJ) outlined more attacks.

Last month another Tolo News reporter – Ziar Yaad Khan – was believed to have been killed by the Taliban, before it was confirmed that they had held him at gunpoint and assaulted him.

And days before that Taliban killed a relative of a Deutsche Welle journalist while hunting for him.

The group had earlier claimed it would respect freedom of the press, but its actions yesterday and over the past weeks indicate otherwise. A spokesman for the group has already warned people against taking to the streets in protest, and warned journalists that they should not cover any demonstrations.

A stark reminder of the impact the Talban has already had on a free press was made by media watchdog Reporters Sans Frontieres, or Reporters Without Borders, last week, when it said active female journalists in Kabul are below 100 since the group seized power, compared with 700 before.

The make-up of the new government has led to further concerns.

The Taliban had promised an inclusive government that would reflect the ethnic identities that form the country, but all top positions were handed to key leaders from the movement and the Haqqani network — the group’s most violent branch and one known for devastating attacks.

The post of interior minister – equivalent to the Home Ministry post in India – was given to Sirajuddin Haqqani, who is wanted by the United States’ FBI.

None of the government appointees were women.

The Taliban’s first period in power was replete with horrific stories of brute force and disregard for human rights, particularly those of women and children.

The second – a Taliban 2.0 – was supposed to be different.

With input from AFP