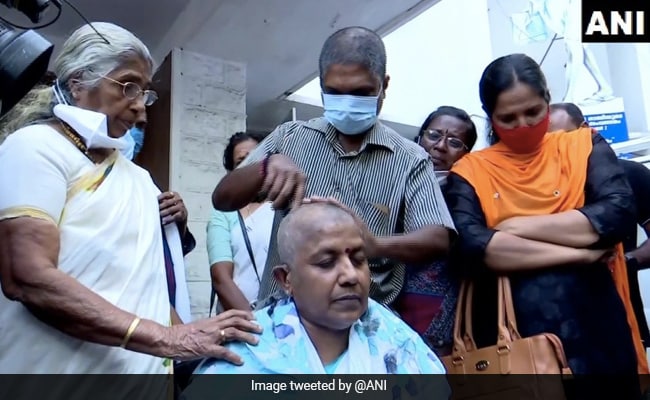 Lathika Subhash said she will contest as an independent candidate (File)

A day after she resigned as Mahila Congress chief and tonsured her head in protest following denial of ticket, Lathika Subhash on Monday quit the party and decided to contest as an independent for the April 6 assembly election from Ettumanoor in Kottayam.

In the letter to Mrs Gandhi, Ms Subhash said: “Congress had miserably failed to understand the feelings of Mahila Congress and its workers. As a woman, I feel this is a planned neglect against us.”

“None of the Mahila Congress representatives has got the ticket to contest in the election,” she said.

The parent organisation had not meted justice to the Mahila congress, the senior leader said, resigning from the AICC. Ms Subhash told PTI she had also resigned from the KPCC membership.

At a gathering of her well-wishers at Ettumanoor, her home town this evening, Ms Subhash announced she would contest as an independent and that she took the decision respecting the sentiments of her followers and well-wishers.

“Many leaders gave me hope and I expected a seat,” Ms Subhash said, adding she had informed the Congress working committee member, A K Antony, and few others that she would tonsure her head in protest in case she was denied a seat.

Ms Subhash also said she was not given the option of choosing any other seat as was being claimed by senior leaders now.

“The tonsure is to ensure that no women face the humiliation that I had gone through,” she said in a choked voice.

She later took out a procession at Ettumanoor. Senior party leaders, including Oommen Chandy and Ramesh Chennithala, have said Subhash had been adamant about being allocated Ettumanoor and did not provide other options to the party.

Mr Chandy on Monday said there was no possibility of any discussions with Subhash at this juncture.

“She gave the alternative option only after all the decisions were made in Delhi. By then everything was decided. It was unfortunate,” Mr Chandy said.