Anushka Sharma rung in her anniversary with some delicious food!

Anushka Sharma and Virat Kohli rung in their third wedding anniversary on 11th December, 2020. The soon-to-be-parents received congratulatory messages and wishes from family and friends on social media. “3 years of us & very soon, 3 of us,” wrote Sharma on Instagram sharing a sweet click of the duo. “3 years and onto a lifetime together,” said Kohli sharing an unseen picture of Anushka Sharma from their wedding day. Although they were not together on their anniversary day, as Indian skipper Virat Kohli is currently in Australia, Anushka Sharma nevertheless made it a point to enjoy the day with some delicious food with her family. Take a look at the story she shared. 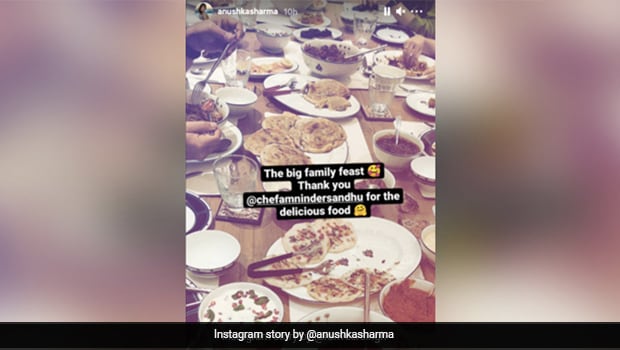 “The big family feast,” wrote Anushka Sharma as a caption with her Instagram story. She thanked Chef Amninder Sandhu for the delicious food – which included some truly droolworthy treats. The most prominently featured item was some lip-smacking Chhole Bhature, which is one of Delhi’s most famous street food items. We could also spot some refreshing pomegranate Raita, tomato chutney and Uttapams as part of the dinner spread. What better way to ring in the joyous occasion than with some delicious food!

Over 27 Diplomats, Their Families Due To Leave US In January, Russia Says