Although considerably later to the smart speaker segment than Google and Amazon, Apple launched the HomePod in 2018. The speaker finally made it to India over two years after its global launch, priced at Rs. 19,900. Like many Apple products, the HomePod is built to work well within the Apple ecosystem, thanks to specialised connectivity and voice assistant support through Apple’s own technologies such as AirPlay and Siri. If the size or price of the HomePod are key factors in your buying decision, Apple’s latest launch has made it a bit easier to own one of its smart speakers.

Enter the Apple HomePod mini, a smaller and more affordable smart speaker priced at Rs. 9,900. Launched alongside the iPhone 12 series, the HomePod mini is Apple’s attempt at making its smart speaker range more accessible, while maintaining the same capabilities as the larger HomePod. How good is the HomePod mini? Find out in our review.

The HomePod mini has no buttons, only a touch-sensitive panel at the top to control volume, playback, and Siri

The ‘mini’ nomenclature on the HomePod series is as accurate as with the iPhone 12 and iPhone 12 mini; the HomePod mini has a smaller form factor, but with the same set of features as the larger HomePod. However, Apple has changed the shape a fair bit, with the smaller device sporting a spherical body rather than the cylindrical form of the bigger HomePod.

The shape suits the size quite nicely, and the HomePod mini is easily the nicest looking compact smart speaker you can buy today. The outer side of the speaker has a soft, mesh-like fabric cover which adds to the attractive design. The bottom has a grippy texture, and that’s aso where you’ll find the only Apple logo on the device; strangely completely hidden away from view in normal operation. The HomePod mini is available in two colours – white and space grey – and while my white review unit does look good, the grey does look nicer, in my opinion, and will also be less susceptible to discolouration from household dust and grime.

The top of the speaker is touch-sensitive for controlling volume and playback, and invoking Siri. There are no physical buttons or ports anywhere on the device. Unlike other smart speakers, the power cable is fixed, with a USB Type-C plug on the other end that connects into the included power adapter. This means the HomePod mini is always on when plugged in, and once set up, it’s always connected to your Wi-Fi.

The controls are quite simple – the touch zones for volume are marked with symbols, while the centre is a multi-function zone that controls both playback and Siri. Of course, the microphone is always on and listening, so you can control volume and playback with the ‘Hey Siri’ wake command as well. While other smart speakers have physical switches to mute the microphone, you can only deactivate Siri on the HomePod mini from the Home app on iOS.

Setting up and controlling the HomePod mini needs an iOS device, and I used my iPad mini (2019) to complete the process through the Home app. Although it took a while to get through, the process is easy and reliable, with the HomePod working fine for me after that. Apple sent me two HomePod mini units, so I was also able to set up and test the stereo pairing mode. You can also use multiple units for traditional multi-room connectivity, if you choose.

The Home app gives you access to most settings related to the HomePod mini, and also lets you play music directly on the speaker while using your iOS device as a controller. There is also the ability to control ‘Intercom’, a new feature that allows users to send messages directly to specific Apple devices, as well as broadcast messages to all devices in your home. You can also set up and voice control any HomeKit compatible IoT accessories in your home using the HomePod mini. 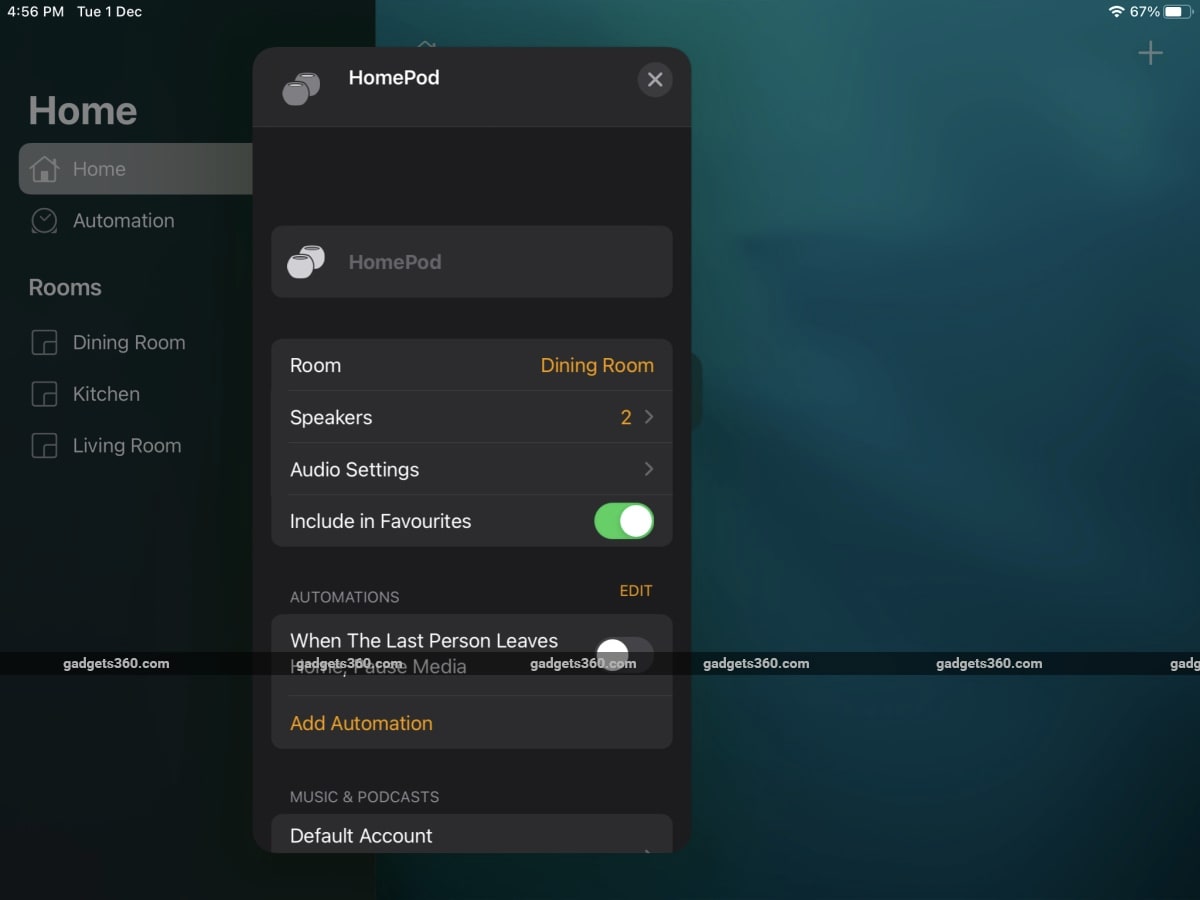 Additionally, I noticed that stereo pairing isn’t supported by the macOS system on my MacBook Air, even after the update to Big Sur. When online, both speakers are detected separately, and I could choose either one for system audio but couldn’t use them together as a stereo setup. Using an Apple app such as Apple Music or Apple TV on my laptop did allow me to use the speakers as a stereo pair, but this was obviously not the ideal scenario for use with my computer.

Like with the larger HomePod, the HomePod mini only directly works with the Siri voice assistant and Apple Music to stream music through voice commands. This means that you’ll need an active Apple Music subscription on the account linked to the smart speaker in order to play music on demand. The device does also support iTunes Music purchases, Apple Music Radio (for free streaming), Apple Podcasts, and news briefings. You can use AirPlay to stream from some other services such as Spotify with compatible devices, which I was able to do using my iPad mini.

The HomePod mini has a single full-range driver and two passive radiators for sound, AirPlay 2 for audio streaming over Wi-Fi, and a four-microphone system for picking up the ‘Hey Siri’ wake word and subsequent voice commands. The Homepod mini does have Bluetooth 5, but this can’t be used to stream music like on other speakers; it’s only used for the initial setup process and communicating with smart devices. There is also the Apple U1 chip, which enables Apple’s Ultra Wideband connectivity to detect other U1-enabled devices in the immediate vicinity. It can be used to hand off audio from an iPhone just by holding it near the speaker, with more personalisation features coming with future software updates. .

As with the rest of Apple’s audio products, the HomePod mini makes up for all of its Apple-specific limitations with sound quality. This is the best-sounding compact speaker you can buy, and its tightly controlled ecosystem of services and features helps maintain the quality of the sound and performance. Although not as loud as other speakers its price, it is sufficiently loud for desktop use, and using a second HomePod mini in a stereo-paired setup does give the system enough oomph.

As mentioned, the HomePod mini is designed to work with only the limited protocols and services that are fully tied in with Apple. This means that there’s no old-fashioned Bluetooth audio playback, and you’ll have to use AirPlay for connectivity with source devices. If you have a Mac computer, iPhone, or iPad, you have all you need to put the HomePod mini to good use. I largely played music on the speaker using Apple Music on either my laptop or tablet, but I also tried Spotify on my iPad, as well as regular AirPlay to stream system audio from my laptop to the speaker. 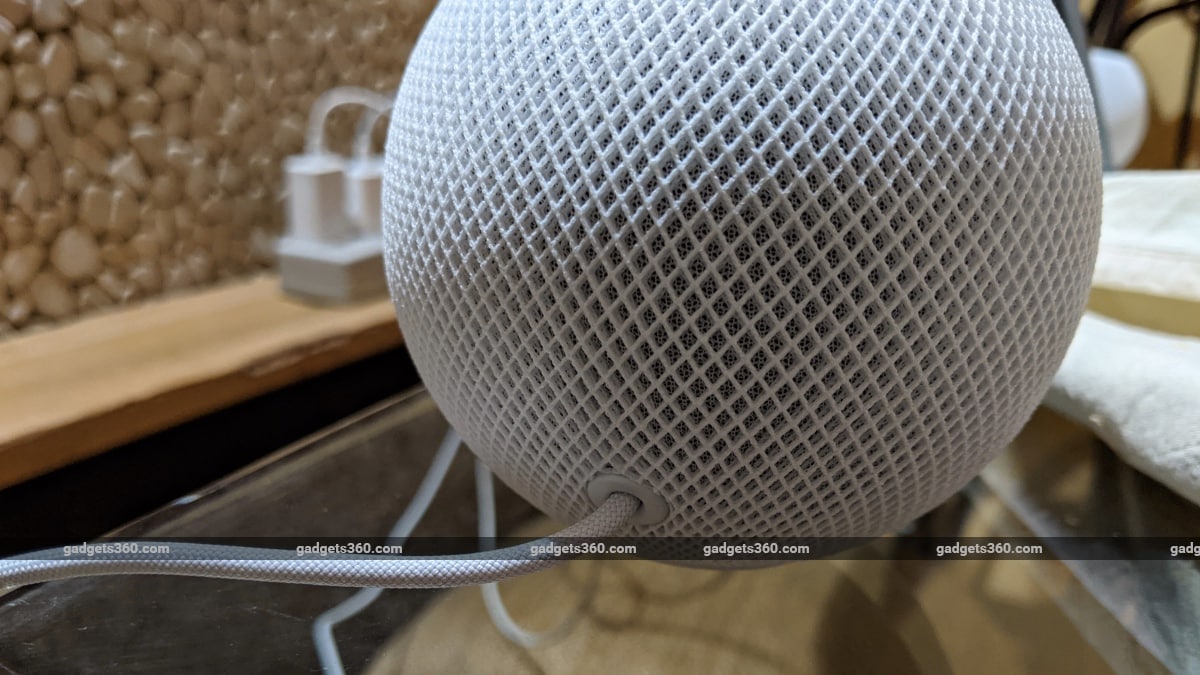 The power cable of the HomePod mini is fixed, with a USB Type-C plug at other end

The Apple HomePod mini stands out for its sound quality, and it’s particularly impressive how loud and refined this speaker sounds for its size. I quite enjoyed listening to Truth by Kamasi Washington on the HomePod mini, with the speaker offering a great combination of detail, a clean sonic signature, and plenty of refinement across the frequency range. The speaker held its own through the track’s slow, calculated buildup and eventual orchestral levels of engagement, with the jazz drums in particular sounding punchy and emotional.

Although the sound was immersive and engaging across sources and genres with even just one HomePod mini, Apple’s support for stereo pairing brings out a whole lot more if you are able to pick up two to use together. With some smart positioning, I was able to get a wholesome and impressive soundstage with proper stereo separation from the paired HomePod minis.

Kamasi Washington’s Truth sounded even more beautiful and detailed with the stereo setup, with the speakers offering up plenty of detail. This is the kind of sound I would expect from a high-end multi-speaker system. Although this particular genre and track benefited a lot from the stereo setup, it did help music across genres, with even the lively and cheerful Alfonso Muskedunder by Todd Terje sounding more lively.

The Apple HomePod mini has a four-microphone system for voice commands. This worked well from even distances up to around 3m, but not any farther than that. Siri has improved considerably in its ability to understand the Indian accent, and I generally had no trouble with basic tasks such as playing specific tracks, setting timers, and getting simple questions answered. HomeKit’s ecosystem of IoT devices is still quite limited as compared to Google Assistant and Alexa, so there wasn’t much I could do with the HomePod mini in terms of smart functionality. 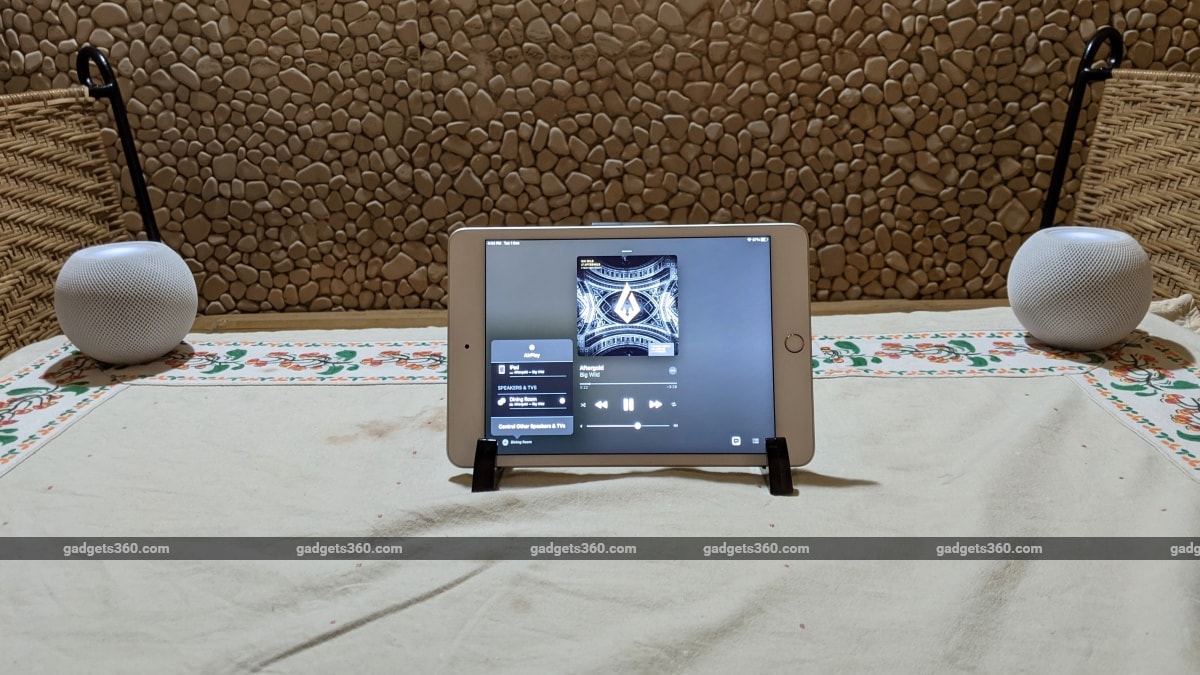 If you have two HomePod mini speakers, you can set up stereo pairing for proper stereo sound

The HomePod mini is an appealing product that delivers where it matters. The device links smoothly with any other Apple products you might have, works well as a compact smart speaker, and sounds pretty great for something this small. I used it as a convenient wireless speaker for my laptop and tablet to good effect, and the smart functionality was somewhat useful as well.

Buying a second HomePod mini will let you set up a proper stereo smart speaker system at around the same price as that of the larger Apple HomePod, and I quite liked how the speakers sounded in this configuration, albeit with some connectivity issues. A single HomePod mini works just fine on its own, too.

All of this said, the HomePod mini is a product meant for a very specific audience, and needs you to be heavily invested in the Apple ecosystem to make full use of it, including having an active Apple Music subscription and at least one iOS device. If you’re an Apple fan, the HomePod mini is the best smart speaker you can buy for the price, but do also consider the larger HomePod if you have the budget for it.

Are iPhone 12 mini, HomePod mini the Perfect Apple Devices for India? We discussed this on Orbital, our weekly technology podcast, which you can subscribe to via Apple Podcasts, Google Podcasts, or RSS, download the episode, or just hit the play button below.