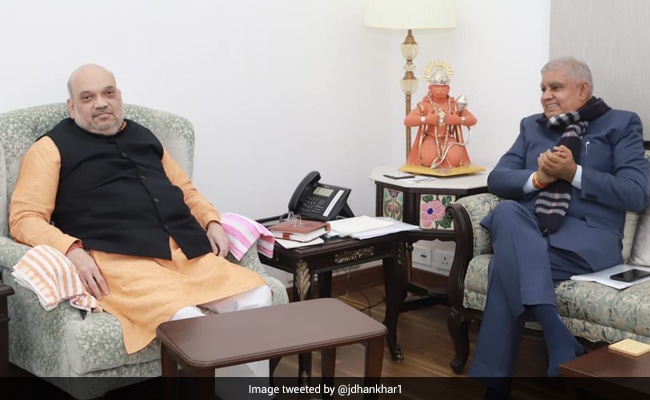 West Bengal governor Jagdeep Dhankhar on Saturday met Union Home Minister Amit Shah in the national capital and confirmed that among the concerns discussed was the possibility of violence in the upcoming assembly elections.

“2021 will be a very important year in Bengal because there will be elections in the state. When we look at the panchayat elections of 2018 and the general elections of 2019, it is seen that they have been bloody; rules have been violated and voters have been under stress,” Mr Dhankhar said at a press meet later in the day.

The governor’s meeting with Amit Shah came just three days after a surprise call at Raj Bhavan by Bengal Chief Minister Mamata Banerjee, whose relations with Mr Dhankhar are known to be anything but amiable.

In fact, recently, five senior MPs of the Trinamool Congress wrote to the President asking him to recall the governor for violating the constitution repeatedly with his acts and utterances against the West Bengal government.

The diplomatic lines were something of a fig leaf. The governor has repeatedly accused Mamata Banerjee of politicising the administration and using government infrastructure for political ends.

“Government workers and wealth cannot be used for political purposes. That is illegal and a misconduct,” Mr Dhankhar said.

“Anyone who believes in the constitution cannot say government workers can do political work,” he added.

Mr Dhankhar recalled a recent visit to Diamond Harbour where he felt the administration had not followed the protocol befitting the governor.

“The MP there is influential. Nothing wrong with that. But there cannot be jagirdari. The governor can go anywhere in the state and if the district administration thinks it can skip protocol, then it has made a mistake. He is accountable. If someone breaks the law, you should not ignore it. I will not as governor,” he said in a clear message to the state’s bureaucracy.

His comment was also a first near-direct reference to Abhishek Banerjee, the Trinamool MP from Diamond Harbour, who is the object of frequent BJP attacks.