In most Bengali restaurants, stir-fried greens would form a part of the thali served to eaters.

To a Bengali table, greens are essential. They are often stir-fried till they are just about cooked but still slightly crunchy. Rarely would you find paeans written about soggy, overcooked stews with greens in them. They are, rather, a great way to start a meal, a small interlude before the mains come in. While consumption, most Bengali eaters follow a certain pattern – the introductory items before the dal is consumed with the barest minimum of rice, then comes the lentils, which is consumed with a little more, and finally, the animal protein, mostly in the form of fish, which requires the most amount of rice to be consumed with it. This happens, perhaps, by seeing other eaters around them, who would give greens and bitters a cursory glance and distract themselves with “tastier” things to come. Greens and bitters and other “starters” such as that are supposed to be good for you, and they provide a healthy hit of fibres that promote good gut health as well. Generally, they would be dressed up in the bare minimum – hot oil would be tempered with a spice or two, the greens would go in, and within a few minutes, you would have a portion of wilted greens, ready to be consumed with a dash of kasundi on top and a few crumbled vadis, generally tiny masoor dal ones that are deep fried and added just before serving, so that they would not get soggy. The kasundi would add a pungent mustard kick that would add a zing to the otherwise simple recipe.

(Also Read: Gola Roti: This Bengali-Style Savoury Pancake Is A Must Try For Breakfast (Recipe Inside))

One of the very first food references from Bengal is a short verse from Prakritapaingala, compiled by anonymous authors in the 13th century,

“A man is fortunate if his wife serves him hot rice, with ghee made from cow’s milk, cooked jute leaves (paat shaak), mourola fish, together with some hot milk” is what this verse roughly translates to. Lentils didn’t much figure in here, and perhaps because of the abundance of fish and greens available in the region, that made its consumption rather unnecessary for long. It was perhaps with the Vaishnav movement during the 16th century when pulses gained a considerable amount of mileage as an alternative to animal protein. Jute leaves is just one of the fourteen mandatory greens that are to be consumed on bhoot choturdoshi, the Bengali Hindu equivalent to All Soul’s Day, which happens one day before Kali Puja, when the barriers between this world and the other are lowered considerably. This is the day when fourteen greens are stir-fried together and consumed in many households. 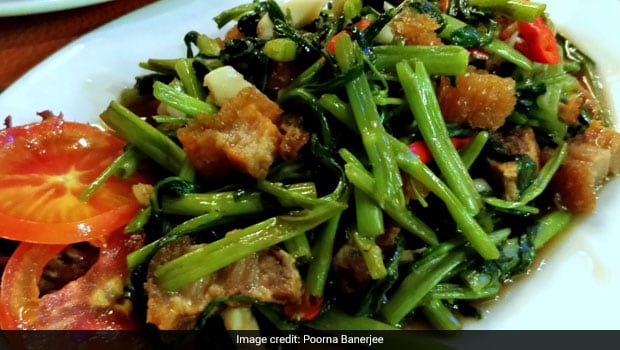 In most Bengali restaurants, stir-fried greens would form a part of the thaali served to eaters. However, its presence is unmistakable in other cultures as well. In the North East, stir-fried greens form a significant part of the meal. Doma Wang of Blue Poppy Thakali serves up a simple dish of stir-fried greens that is heavily in demand, with rice or on its own. “It is really good for you, and so tasty with some rice. I mostly stir-fry morning glory leaves, or what is known as Kangkong or kolmi shaak, and the recipe I use is what I learned in Taiwan. It is called kong xin tsai in Mandarin, and it would literally translate to “vegetable with hollow heart”, a hat tip to the hollow stems of these greens.” Kangkong also features heavily in the South East, in various formats, like in Korea or Thailand. Stir-fried morning glory with tiny baby shrimps or bits of crispy pork would be a simple side dish to a big plate of rice in the streets of Phuket, while a spinach muchim from Korea may involve blanching the spinach first, and then stir frying it with sesame oil and garlic for a very short time.

Stir-frying is a great way of cooking since it involves cooking over high heat for a very short time that helps retain a considerable amount of nutrients intact while killing germs that may exist in the surface of the leaves. The recipe shared today is created with spinach, which is currently in season. You can always add a handful of peas and let them get half-cooked before adding the spinach, and you can serve this with some proteins on the side for a really nutritious and low-carb meal. For variety, switch out the nigella seeds for a tablespoon of crushed garlic.

About Poorna BanerjeePoorna Banerjee is a food writer, restaurant critic and social media strategist and runs a blog Presented by P for the last ten years where she writes about the food she eats and cooks, the places she visits, and the things she finds of interest. She is deeply interested in culinary anthropology, and food history and loves books, music, travelling, and a glass of wine, in that order.