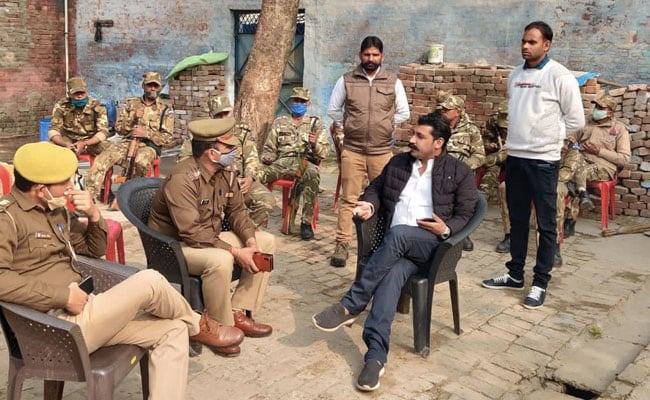 Chandrashekhar Azad was detained at his home in Saharanpur.

Bhim Army Chief Chandrashekhar Azad was detained this afternoon at his home in Uttar Pradesh when he was on his way to join the protesting farmers who have called for a nationwide shutdown till 3 pm.

Last week, Dalit leader Chandrashekhar Azad, also known as “Raavan”, had joined the farmers protesting at Delhi’s borders against the controversial farm laws. He slammed the government over the use of water cannons and tear gas when the protesters began their march to the national capital last month.

“The Centre tried to defame and stop the farmers’ agitation…Our mothers, children, elderly were stopped (from marching to Delhi) with watercannons, barbed wires, tear gas…they (farmers) are not terrorists, they are the backbone of our country. We get food because of them…Such treatment (to farmers) shows how afraid the government is of the farmers’ movement,” he had said. “They are now witnessing democracy’s biggest power: opposition,” he further added.

Farmers camping near Delhi, who began their protest about two weeks ago, have called for a nationwide strike today against the contentious laws, which they say will allow monopoly of private players in the farm sector. Almost all commercial transport and truck unions, have backed the call; opposition parties are also supporting the farmers.

This morning, Delhi Chief Minister Arvind Kejriwal’s AAP claimed that the Chief Minister was placed under house arrest because he met the protesters on Monday.

The AAP alleged that Mr Kejriwal was deliberately blocked because of the Bharat Bandh called by farmers protesting against the central government’s new farm laws. “BJP’s Delhi Police has put Hon’ble CM Shri @ArvindKejriwal under house arrest ever since he visited farmers at Singhu Border yesterday. No one has been permitted to leave or enter his residence,” the party tweeted.

The government will hold the sixth round of discussions tomorrow with the farmers over the new laws.