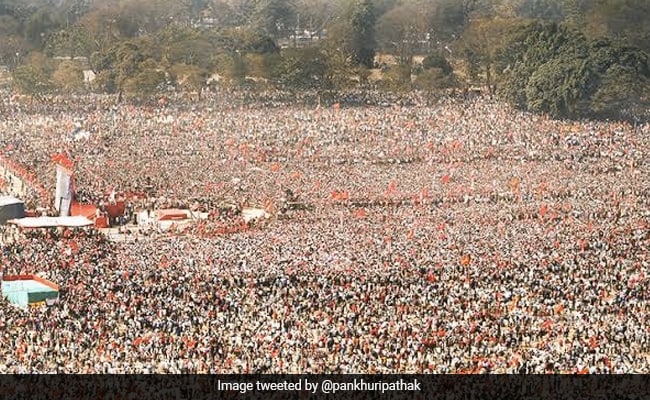 After a decade of losing power, the Left Front, in alliance with the Congress and the newly formed Indian Secular Front (ISF) on Sunday projected itself as a “third alternative force” in the emerging Trinamool Congress versus BJP political binary in West Bengal, but chinks were evident in the nascent alliance.

The Left-Congress-ISF alliance kicked off its campaign for the upcoming assembly elections in West Bengal with a mega rally at the Brigade Parade Ground in Kolkata.

At the rally, leaders of the CPI(M)-headed Left Front called for “knocking out the communal Trinamool and the BJP, and stressed the need for a third alternative to provide a “Janhit Sarkar” (people’s welfare government) to ensure employment generation and usher in industrial development in the state.

State Congress president Adhir Chowdhury said that the grand alliance of the Left-Congress and other secular forces won’t let the West Bengal assembly elections to be a two-cornered contest and would defeat both the ruling Trinamool Congress and the opposition BJP.

However, a discordant note was sounded by ISF chief Abbas Siddiqui who, unhappy with the progress of seat-sharing talks with the Congress, issued a veiled threat to the party.

Mr Siddiqui vowed to defeat the Trinamool and the BJP and ensure that the Mamata Banerjee-led party becomes a “zero” after the assembly elections, but in a word of caution for the Congress, with which the party’s talks are in choppy waters, said that the ISF is here to become a partner and get its rightful claims. “…I am here (in politics) to be a partner, not for any kind of appeasement. I am here to get my rightful claims,” he said.

The Trinamool and the BJP slammed the Left and the Congress, accusing them of surrendering before a “communal force” like the ISF.

Accusing the ruling party and the opposition BJP of dividing people on communal lines to serve their political interests, West Bengal CPI(M) secretary Surya Kanta Mishra said that the state needs a government that would work for its development and would not be a “copycat” of the Trinamool and the BJP.

“Both the TMC and the BJP are two sides of the same coin. They plan to divide people on communal lines and rule. We have seen how TMC leaders are joining the BJP lock, stock and barrel. Except for the chief minister and some other leaders, the rest have switched over to the BJP. Both the TMC and the BJP now stand unmasked. We, the Left along with the Congress, would provide an alternative to people,” Mr Mishra said.

CPI(M) general secretary Sitaram Yechury said that the Trinamool Congress has to be defeated first to stop the communal bandwagon of the RSS-BJP and claimed that the Trinamool might join the NDA to form the government in West Bengal in case of a hung assembly.

“The TMC has been part of the NDA (for several years) since 1998. It was part of the NDA government (at the Centre). In case of a hung assembly, I am confident that the TMC would join hands with the BJP to form the state’s government,” he said.