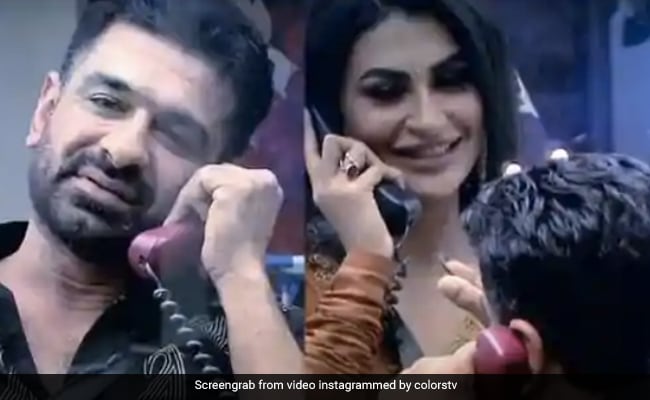 Bigg Boss 14: A still from the show. (Image courtesy: colorstv)

Eijaz Khan, who is currently in the Bigg Boss house, and Pavitra Punia, who got evicted some time ago from the show, are trending incessantly on social media, courtesy their loved up moment in the upcoming episode. In a new promo video of Bigg Boss 14, Eijaz Khan can be seen confessing his love for Pavitra Punia. Separated by a glass wall, Eijaz tells the actress: “Teri baat karne ke liye tarasta hu main, kisise bhi. Main apni zindagi tere saath share karne ke liye tayar hu. Tu jaisi hai, zindagi main jahan bhi hain, mujhe qubool hai.” When he asks her if she loves him, Pavitra Punia says: “Yes, a lot.” She then kisses him from the other side of the wall.

The promo video has also been shared on Pavitra Punia’s Instagram handle. Take a look:

In the episode that will air this weekend, other housemates will also meet their loved ones and family. Rahul Vaidya will get emotional after meeting his mom, while Jasmin Bhasin’s mother will disapprove of her relationship with Aly Goni.

Coming back to Eijaz Khan and Pavitra Punia, the duo used to share love-hate relationship inside the Bigg Boss house. Despite getting involved in major fights, they confessed that they like each other on several occasions.

Eijaz Khan is an actor who is known for his performances in the film Tanu Weds Manu and series Kkavyanjali. He has starred in movies like Kuch Na Kaho, Meerabai Not Out, Zilla Ghaziabad, Lucky Kabootar, Tanu Weds Manu Returns, Shorgul and Upstarts. His credits also include TV shows such as Kayaamat, Kyunki Saas Bhi Kabhi Bahu Thi, Kasautii Zindagii Kay, Karam Apnaa Apnaa and Yeh Moh Moh Ke Dhaagey.