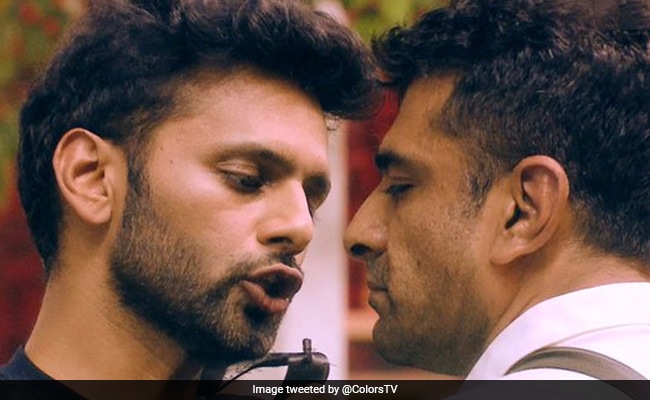 In tonight’s episode of Bigg Boss 14, the contestants woke up to the tunes of the song Twist. On Wednesday’s episode, Bigg Boss announced to stop the Captaincy task. After his big announcement, Bigg Boss decided to give a second chance to the ex-captains Aly Goni, Kavita Kaushik, Eijaz Khan and Jasmin Bhasin. As a part of the captaincy task, all four of the contenders had to sit inside huge boxes while the others had try to remove the participant who they didn’t wish to see as the captain. Bigg Boss asked Eijaz Khan to pick a person who will be performing the task for him since he had an injury.

Initially, Eijaz Khan approached Abhinav Shukla to represent him. However, Abhinav refused to play for him. Later, Eijaz asked Pavitra Punia to play the game and she agreed to go ahead instantly. Rahul Vaidya was the sanchalak (moderator) of the task. During the task, Rahul Vaidya tried to spray something in Pavitra’s box, which made Eijaz very furious. Rahul said that he was anything but unfair during the task. Rahul revealed the reason behind his move was to not want to make Eijaz the captain. Eijaz accused Rahul of being “biased.” An angry Eijaz pulled away Pavitra’s box.

Jaan Kumar Sanu’s target during the task was Kavita Kaushik. He poured oil in her box, while Nikki Tamboli tried to defend Kavita Kaushik. Rubina Dilaik asked Jaan to let people breath for a bit. Jaan explained that his reason was simple that he didn’t want Kavita to be the captain of the house. The contestants will continue to fight for captaincy in tomorrow’s episode.