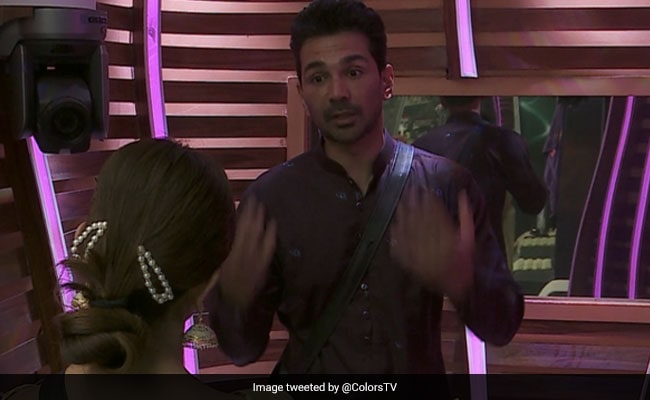 Bigg Boss 14: Abhinav Shukla in a still from the show. (courtesy ColorsTV)

In tonight’s episode of the TV reality show Bigg Boss 14, Rubina Dilaik and Abhinav Shukla got into a fight of sorts. During the captaincy task, Rubina said that she will try to convince Kavita Kaushik to resolve all her differences with the housemates and that she should get out of the box. Abhinav schooled Rubina and said to her, “Rubina tu itni buri ban jaayegi tujhe pata bhi nahi chalega (you will become evil for others and you don’t have any idea about).” He also told her not to get involved in the matters of other people and asked her to let people play the game what they want to. An angry Rubina said, “Kya hum yahan jee hazuri karne aaye hain ( Are we just here to take orders).” Abhinav lost his calm and told her that she is acting like a kid. He also told her if she wants to create unnecessary issues, she can go ahead and do it. He also asked Rubina not to come between the association of Rahul Vaidya, Jasmin Bhasin and Aly Goni.

At end of the episode, Bigg Boss asked Rahul Vaidya (the moderator of the task), who won the captaincy task. He said that Kavita Kaushik won the task and became the captain for the week. An excited Kavita jumped into the pool straight away. Jasmin Bhasin was all smiles after she got out of the box and lost the task.