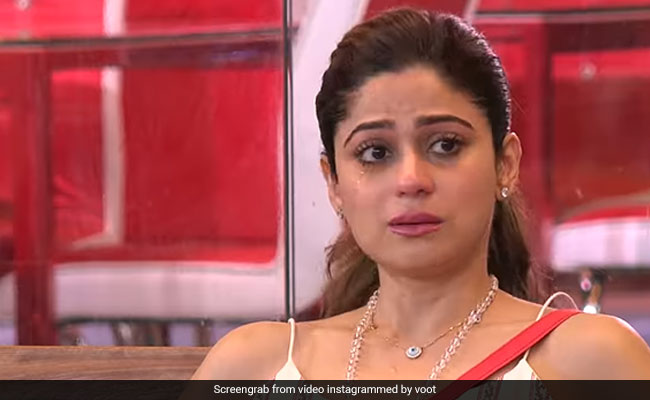 Actress Shamita Shetty recently opened up about her personal life on Bigg Boss OTT. Speaking to fellow housemate Neha Bhasin in what was an extremely emotional moment, Shamita Shetty revealed she tragically lost her first boyfriend. Without taking names, Shamita Shetty said he died in a “car accident.” In a video clip shared by Voot, Shamita Shetty can be seen crying inconsolably while pouring her heart out to Neha Bhasin. Shamita was speaking to Neha Bhasin in reference to her current equation with Raqesh Bapat in the Bigg Boss house. Shamita and Raqesh, who started the show as each other’s “connections”, grew rather close to each other in the house, often hinting that they are attracted to each other.

However, all is not okay between Shamita Shetty and Raqesh Bapat currently. Talking about getting hurt in love, Shamita Shetty told Neha Bhasin: “This is why for so long, I didn’t allow anybody in my life. Because it took me so much time to put myself… the pieces back together that I would much rather take care of myself than let myself be in somebody else’s hands. I’m fine, being on my own then.”

Just a glimpse of Shamita Shetty and Raqesh Bapat’s grievances with each other is in this Bigg Boss promo, in which Shamita gets hurt during a task. Shamita can be heard reprimanding Raqesh for saying: “I told you so” before checking up on her. “I am physically hurt,” screams Shamita, to which Raqesh says: “You’re always hurt. Can somebody else also not be hurt?”

Watch this space for more updates on Bigg Boss OTT.