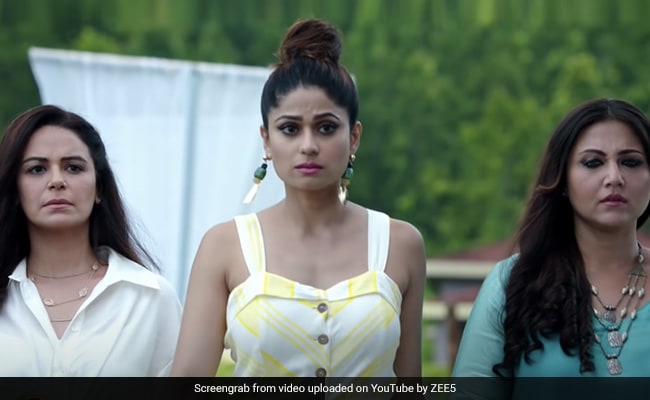 Shilpa Shetty gave a massive shout out to sister Shamita Shetty and the trailer of her upcoming series Black Widows that released on the Internet on Tuesday. The ZEE5 original also stars Swastika Mukherjee and Mona Singh in the lead roles. Sharing the trailer on social media, Shilpa Shetty describes it as “fab” and wrote that she “can’t wait” to watch the series next month. Black Widows will premiere on ZEE5 on December 18. Shilpa, all praise for Shamita Shetty’s performance, wrote this in the caption: “So excited, fab trailer, Tunki! Love how edgy and thrilling this trailer is. I’m so excited to see what you have in store for us. #BlackWidows premieres on December 18 and I can’t wait to watch this one. Congrats, my darling, Shamita.”

Black Widows is a crime thriller that tracks the story of three friends (Mona Singh, Shamita Shetty and Swastika Mukherjee) – how they plan the deaths of their respective husbands after being tortured by them. However, their plan fails after one of the husbands manages to survive.

Shilpa Shetty, after her 13-year-long sabbatical, will next be seen in Priyadarshan’s Hungama 2 and Sabbir Khan’s Nikamma. Hungama 2, is a sequel to Priyadarshan’s 2003 film Hungama, also stars Paresh Rawal, Meezaan Jaaferi and Pranitha Subhash.

Shamita Shetty is best known for her performances in Mohabbatein, Mere Yaar Ki Shaadi Hai and Zeher. She has also participated in realty shows like Bigg Boss 3 and Jhalak Dikhhla Jaa 8.