Capturing Cricket: Steve Waugh In India Review – The Documentary Is A Captivating Portrait Of A Nation’s Passion For Cricket – Unblendednews
Skip to content
Trending Stories 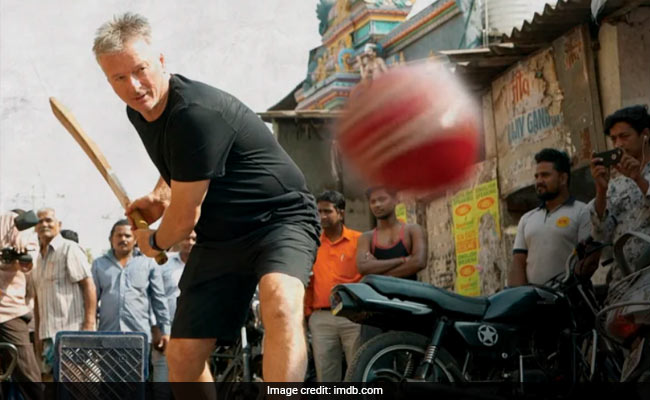 The “heat of the Indian cricket fever” gets “to the core of the Iceman” in Capturing Cricket: Steve Waugh In India. The Australian Broadcasting Corporation-produced documentary, streaming on Discovery Plus, is a captivating, episodic portrait of a nation’s passion for cricket. It is just as much a candid peep into the life and times of a great ambassador of the sport.

In his playing career, he wasn’t known not to wear his heart on his sleeve. But when he is in the midst of the unbridled frenzy that cricket stirs in India, be it the desert of Rajasthan, the foothills of the Himalayas or the teeming streets of the cities, even Waugh, described by wife Lynette as “steely, cold and a man of few words”, cannot keep calm.

The former Australian cricket captain has been to India innumerable times. But this trip, 16 years after he quit the game, is different. He has swapped his bat for a camera and hit the streets and playgrounds to document the country’s symbiotic, no-holds-barred relationship with cricket.

The tour’s primary purpose was to produce a book of photographs. It has additionally yielded a lively hourlong film. Capturing Cricket: Steve Waugh In India, needless to say, has plenty of India in it, from the Oval Maidan of Mumbai to the quaint Himachal Pradesh Cricket Association Stadium in Dharamshala to a Mathura riverfront garbage yard that doubles up as an arena for a bunch of enthusiastic young cricketers.

The man behind the famously private sportsman emerges as he engages with a love that no knows no bounds. The dual-prism overview straddles a wide spectrum of themes without turning overly, dryly academic. Capturing Cricket is highly entertaining, if not exhaustive. But, then, how is it even possible to encapsulate India and its affair with cricket in a single film?

Humour flows through the film as Waugh, after initial signs of nerves, comes to grips with the job at hand. Helped along by mentor Trent Parke (Magnum photographer and winner of four World Press Awards), he plunges into the mission with enthusiasm, his proven penchant for perfection intact.

Waugh plays with the Maharajah of Vadodara (a former first-class cricketer himself) in an ornate Lakshmi Vilas Palace hall packed with priceless, irreplaceable artifacts as well as with young boys and girls in a crowded Dharavi lane and with blind cricketers in Bengaluru. It may be fun and games, but the spark of yore shines through frequently when Waugh has a bat in his hands.

Since retiring from the game, he hasn’t held a bat (except for a couple of charity matches in Australia) but the gusto of the young cricketers forever ready to play, rubs off on him. Waugh, who first toured India as a 21-year-old in 1986, landed in India in January 2020 with good friend and cricket enthusiast Jason Brookes (besides Parke, whose clicks of Waugh the cricketer intersperse the narrative) and scoured the length and breadth of India over a period of 17 days. The excitement of making new discoveries and stumbling upon various known and little-known facets of India underlines the film.

When Waugh arrived in India for the first time, it was “a total culture shock… a bombardment of the senses”. But the country gradually cast a spell on him as he and some of his cricketing mates ventured out of the comfort of the hotel rooms, cafes and swimming pools.

The team handpicked nine cities – Mumbai, Delhi, Kolkata, Bengaluru, Vadodara, Dharamshala, Jodhpur, Agra and Mathura – and went in search of stories that would give the world an idea of India’s love of a game that the British invented but, as Rahul Dravid, one of the greats interviewed for the film, says, “was meant to be played by Indians”.

The footage that Waugh and Parke’s forays yielded then landed before director Nel Minchin, who had to work in the middle of the coronavirus pandemic to give final shape to the film. She collaborated with India-born Aussie-bred screenwriter Mithila Gupta and remotely filmed and recorded narrator Harsha Bhogle and Indian megastars Sachin Tendulkar and Dravid, besides footballer and Steve Waugh Foundation ambassador Adam Goodes, Adam Gilchrist, Waugh’s early teammate Mike Whitney, childhood friend and cricketer Gav Robertson and wife Lynette.

From a three-year-old prodigy in a Kolkata suburb to cricketing monks in the hills of Himachal Pradesh, Capturing Cricket covers them all, also taking into its sweep the 100th birthday party in Mumbai of the oldest living registered cricketer in India.

Tendulkar puts in an appearance at the bash and the focus inevitably swings away from centenarian Vasant Raiji (he passed away even as finishing touches were being given to the film) to the barefoot Sachin (he has taken off his shows at the door out of respect for the veteran cricketer). Here, without probably meaning to, the film shows us the nature of present-day hero worship.

Not surprisingly, Waugh describes Tendulkar as god and refers to cricket as a religion in India. On cue, the film cuts to a shot of an idol of Lord Ganesh holding a cricket bat. Waugh had no way of knowing what would befall Wasim Jaffer, the highest run-scorer in Ranji Trophy cricket, a few months down the line. Religion has since assumed a troubling connotation.

Dravid refers to “the incredible diversity of India” and how “cricket binds us as a nation”. That very notion is under threat. India is entering a new era in which all the talk about cricket being a great equalizer, a breaker of class and religious barriers, will not ring as true as it once did. Of course, it is beyond the scope of Capturing Cricket to highlight that incipient reality because it isn’t the film’s mandate to link the gentleman’s game with the not-so-subtle changes being ramrodded into our lives.

The film also alludes to the power of the social media in another context. Waugh and his mates find the three-year-old Behala boy Sheikh Shahid whose off-drives went viral on YouTube. Also in the film is Delhi whiz kid, Shayan Jamal, all of eight years old, whose batting technique is to die for.

The film tangentially reminds us that we, as a cricketing nation, should continue to seek inspiration in the chaotic streets, the overcrowded maidans and the grubby neighbourhoods. Those are the places where the game is best nurtured. Capturing Cricket takes us there – and beyond.