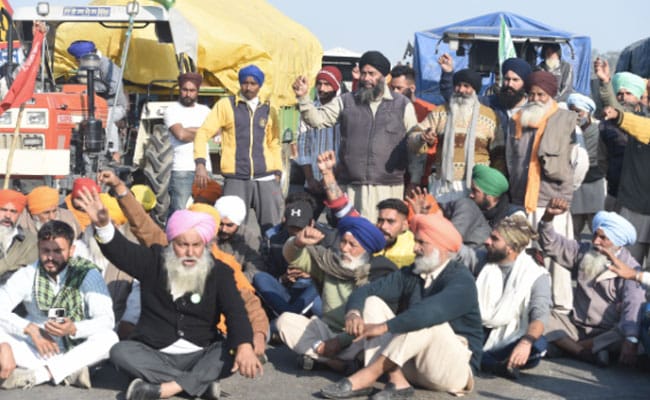 Farmers are protesting against the Centre’s three farm laws. (File)

A case has been filed against Haryana Bhartiya Kisan Union (BKU) president Gurnam Singh Chaduni for his alleged involvement in the farmers’ agitation in the state in protest against the new farm laws, police said.

“Two cases have been registered against protesting farmers. The case has been filed under relevant section against Kisan leaders including Gurnam Singh Chaduni. A case has been also filed against some unidentified farmer leaders,” Karnal’s Deputy Superintendent of Police, Rajiv Kumar, said.

Over the past few months, thousands of farmers mainly from Punjab have been protesting against the new agricultural legislation which they say could be exploited by the private sector to buy their crops at low prices.

Meanwhile, Union Home Minister Amit Shah on Saturday said the central government was ready to hold talks on their “every problem and demand”.

He urged the farmers, who are protesting against three farm laws enacted recently, to shift to Nirankari Samagam Ground marked for their protest by Delhi Police and said the Centre was ready to talk to them before December 3.

“To farmers protesting at the Delhi-Haryana border and Punjab border, I would like to tell them that the central government is ready to discuss all their issues over a meeting called upon by the agriculture minister Narendra Singh Tomar on December 3. We are ready to hear all their concerns and demands,” Amit Shah told ANI.

He urged leaders of farmer organisations to bring the farmers to the designated place as it will be more convenient for them and the commuters and they can continue their protest in a democratic manner.

The Farmer’s Produce Trade and Commerce (Promotion and Facilitation) Bill, 2020 and the Farmers (Empowerment and Protection) Agreement of Price Assurance and Farm Services Bill, 2020 were passed by the Upper House in September through voice vote despite objection from opposition parties.