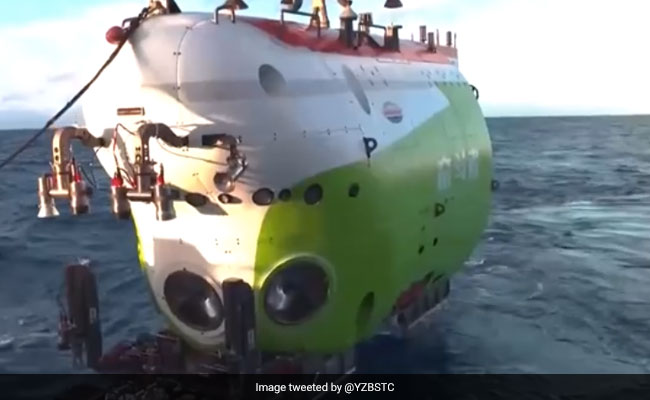 Fendouzhe had earlier this month set a national record of 10,909 metres for manned deep-sea diving.

China livestreamed footage of its new manned submersible parked at the bottom of the ocean Friday, the latest foray by the country’s scientists into the Earth’s deepest ocean trench.

The vessel “Fendouzhe”, or “Striver”, descended more than 10,000 metres into the Pacific Ocean’s Mariana Trench with three researchers on board, state broadcaster CCTV said.

Video footage shot and relayed by a deep-sea camera showed the green-and-white submersible moving through dark water surrounded by clouds of debris as it slowly touched down on the seabed.

Fendouzhe had earlier this month set a national record of 10,909 metres for manned deep-sea diving, just shy of the 10,927-metre world record set by an American explorer in 2019.

The submersible, equipped with robotic arms to collect biological samples and sonar “eyes” that use sound waves to identify surrounding objects, is making repeated dives to test its capabilities.

It is observing “the many species and the distribution of living things on the seabed”, scientists on board told CCTV.

The researchers will collect specimens for their work, the broadcaster said.

“It takes more than two trials before we can call it a real success,” Zhu Min, a researcher at the Chinese Academy of Sciences involved in the mission, told CCTV on Tuesday.