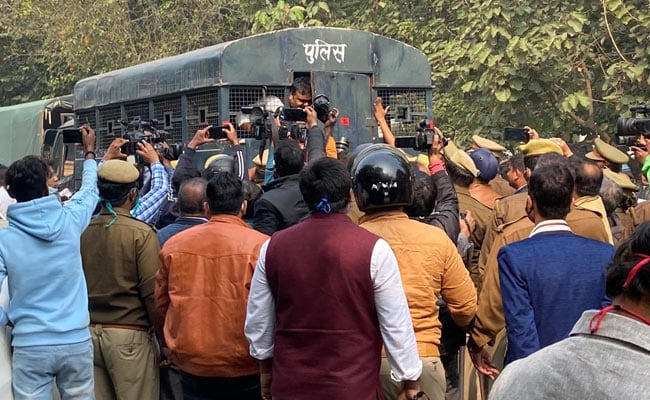 The clampdown on the “Kisan Yatra” has been justified citing the COVID-19 protocol in place across the state.

“We were informed that people will gather at one spot and launch a procession from there, and I understand that any crowd that remains static for half an hour or an hour, doesn’t help anyone, not even the SP President. We had even requested that the programme be dropped,” Kannauj district magistrate Rakesh Mishra told NDTV.

The 13-km Kisan Yatra from Thathia to Tirwa in Kannauj was to launch the SP’s farmer marches across all districts of Uttar Pradesh.

The police today even sealed Lucknow’s Vikramaditya Marg, some 200 metres from Mr Yadav’s residence and close to the SP office, with barricades and considerable police presence.

In an ostensible response, Mr Yadav tweeted an Urdu couplet, roughly translated as, “Wherever one looks, the people are against you. Oh tyrant, who all will you detain?”

SP National Spokesperson Rajendra Chaudhary called the curbs on Kisan Yatra an “undemocratic move” . “Peaceful demonstration is the democratic right of every individual, and the government is adamant on violating it…The government is afraid of Akhilesh Yadav participating in the Kisan Yatra,” he said according to a PTI report.

Thousands of farmers, mostly from Punjab and Haryana, have been protesting in and around Delhi demanding a repeal of three agricultural laws brought in by the central government in September. Several political parties, including the Congress, the BSP, and now the SP, have voiced their support for the protesters, and in recent weeks sought a repeal of the new laws.