As hopes of a COVID-19 vaccine grow in the closing weeks of 2020, the Lancet medical journal has drawn attention to what Bill Gates and others say could be worse than the pandemic – climate change. The fifth Lancet Countdown on health and climate change is a global report and the prognosis for India, in particular, isn’t good news.

The report analyses the health effects of climate change-related extreme weather events like floods, storms including cyclones, heatwaves etc. Cyclone Amphan, which hit West Bengal last May, has been the costliest cyclone on record for the North Indian Ocean with reported economic losses in India of approximately US$14 billion according to a new World Meteorological Organisation report.

The Lancet report, however, calls for climate change mitigation to save lives due to air pollution. Worldwide seven million deaths are linked to this. This report has now detailed deaths in India through various sources of PM 2.5 pollutants.

In all, 465,180 premature deaths in India are linked to PM 2.5 from human-made sources like power plants or agriculture. Coal-linked emissions alone are linked to 95,820 deaths in 2018 – that’s over 10 per hour. The report says, “…phasing out coal is essential, not only for the mitigation of climate change, but also for the reduction of premature mortality due to air pollution.”

In India, emissions from coal-fired power plants account for almost 76,000 of the 90,980 deaths linked to power plants. Over 82,000 deaths are linked to industrial emissions, 13,000+ from coal; transport to almost 70,000 deaths, and household emissions to over 95,000. Emissions from waste and agriculture have been linked to almost 109,000 deaths together. Alice McGushin, Programme Manager at the Lancet Countdown, says, “What our study also adds is detail on the breakdown of the sources of PM2.5 exposure, providing further information on areas of intervention to reduce deaths attributable to ambient PM2.5 exposure.” 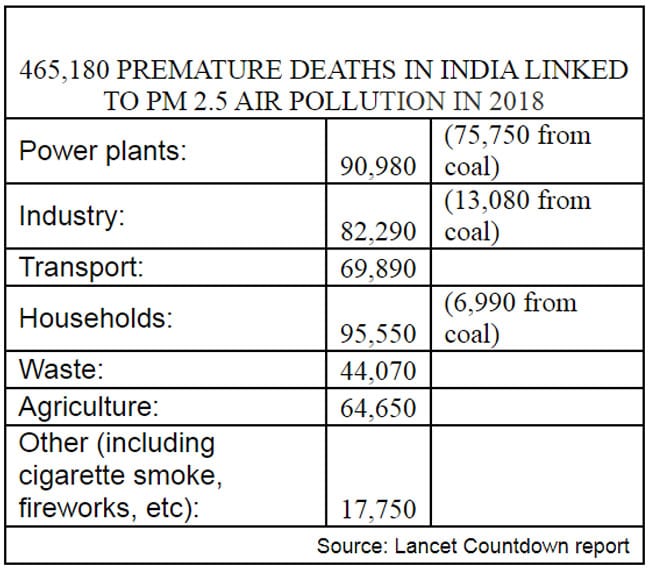 Beyond air pollution, climate change-linked events are hurting India. Both India and Indonesia were among the worst affected countries hit by an almost 54% increase over the last two decades in heat-related mortality in people above 65. The authors estimate as many as 31,000 deaths in India, second only to China’s 62,000 and more than Germany’s 20,000 and 19,000 in the United States. The potential labour capacity losses in India and Indonesia is believed to be equivalent to 4-6% of the GDP of the two nations.

India’s agricultural sector was also amongst the worst-hit by rising temperatures which were responsible for an excess of 100 billion potential work hour lost globally in 2019 compared with those lost in 2000. In fact, of the 302 billion work hours lost in 2019, India lost the most — 118 billion hours or 39% of the global number. This is many times more than other South Asian nations as well as China. 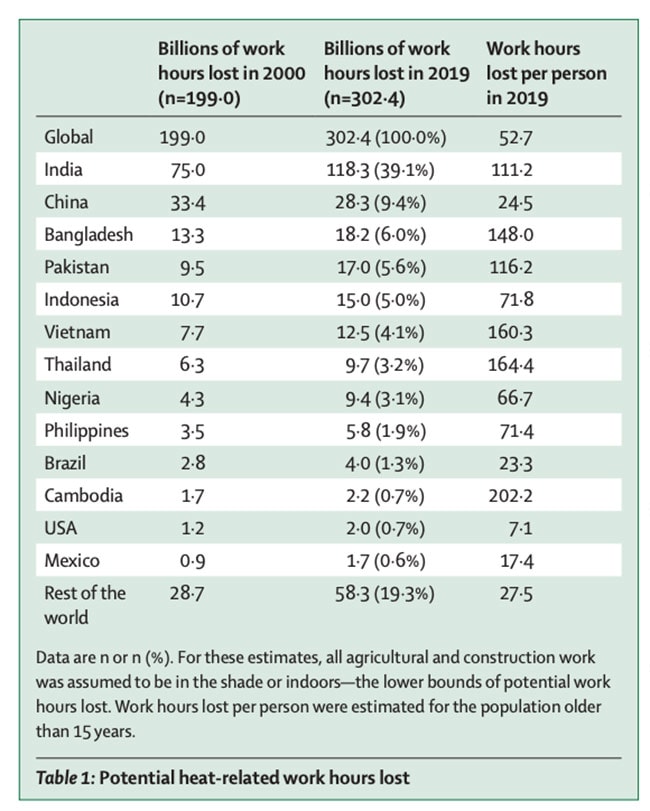 But while India is particularly vulnerable to the ravages of climate change, a growing source of greenhouse gases is from beef consumption. The report says the food system is responsible for 20-30% of global greenhouse gas emissions, most of which originate from meat and dairy livestock. The average emissions from beef consumption has risen to 402 kgCO2e (e for equivalent) per person in 2017 compared with 380 kgCO2e per person in 2000.

All these changes linked to climate change are hitting humanity alongside the Covid pandemic. The authors see this as a warning to change course otherwise healthcare systems will be further overwhelmed in the future. As Dr Ian Hamilton, executive director of the Lancet Countdown, puts it – the world doesn’t have the luxury of dealing with one crisis at a time.