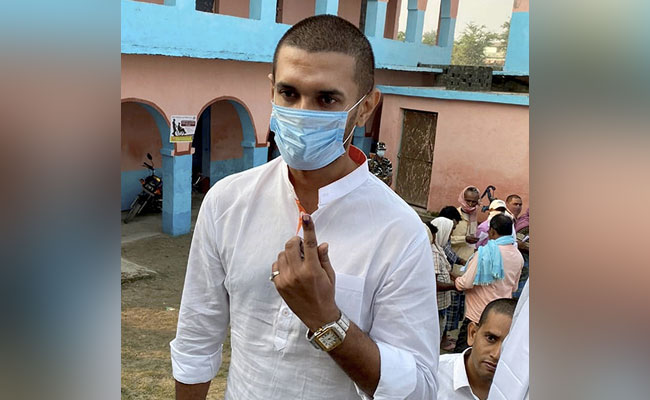 Shortly after Nitish Kumar was sworn in as Chief Minister of Bihar for an unprecedented sixth time, the LJP’s Chirag Paswan tweeted to offer his congratulations.

Hidden in the tweets, though, was a swipe at the JDU boss – a line about the BJP “making you Chief Minister” – to remind him that his party had performed well below par in the election, and that he had retained the top post despite effectively handing control of the alliance to the BJP.

“Congratulations to Nitish Kumarji for becoming Chief Minister again. I hope the government will complete its tenure and you will continue to be Chief Minister of the NDA,” Mr Paswan posted.

“Made by 4 lakh Biharis, I am sending the vision document (the LJP’s election manifesto – “Bihar First, Bihari First”) to you… whatever work you can complete from it, do it. Congratulations once again on becoming Chief Minister and (to) the BJP for making you Chief Minister,” he added.

Nitish Kumar was sworn in as Chief Minister on Monday evening, five days after the JDU-BJP alliance scored a narrow win. The BJP secured 74 seats in the 243-member Assembly, relegating the JDU – which managed 43 – to second place in the NDA in Bihar.

The BJP had stressed that Mr Kumar would remain in the top post if the NDA was re-elected. However, the margins triggered speculation he might be dropped, particularly with talk of a tacit deal between the BJP and Mr Paswan’s LJP to reduce Nitish Kumar’s vote share and influence.

Last week Nitish Kumar said the decision on a chief ministerial candidate would be taken by the NDA – a statement seen as an indication of nervousness. He also ranted over the BJP’s handling of Chirag Paswan, who had declared his aim of a “Nitish-Mukt (Nitish-free) Bihar”.

On Sunday, though, the newly-elected NDA legislators met and named Nitish Kumar as their Chief Minister. BJP leaders reiterated their commitment on this score, but the party also exercised its newfound power to remove Sushil Modi – widely seen as loyal to Nitish Kumar – as his deputy.

The BJP has denied talk of a pre-poll deal with the LJP to do just what it did – drastically reduce Nitish Kumar’s influence and position in the NDA. The Lok Janshakti Party secured 5.66 per cent of the vote share, while the difference between the BJP and the JDU was 4.27 per cent.

Also last week, Mr Paswan, discussing the results of the election, said he had “achieved” what he set out to do. “…my aim for these elections was to ensure that the BJP emerges a strong party in the state and we are happy with the impact we have had,” he told reporters.

The LJP, which fielded candidates against every JDU nominee, finished with just one seat despite contesting 135.