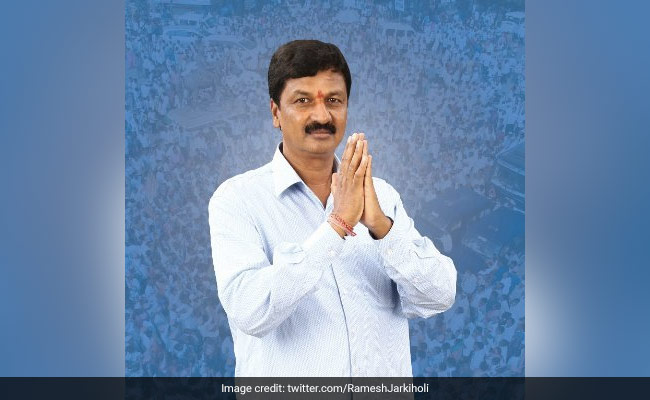 MLA Ramesh Jarkiholi has named no one (File)

The Bengaluru police on Saturday registered a case of conspiracy and blackmailing against unknown persons based on a complaint by BJP MLA Ramesh Jarkiholi, who resigned as minister following allegations of sexual harassment against him.

Instead of approaching the police, the former minister sent his confidant M V Nagaraj to the Sadashivanagar police station in the afternoon to hand over the copy of his complaint.

Police registered a case of criminal conspiracy, extortion and forgery under various sections of the IPC, sources said.

In the complaint, Ramesh Jarkiholi has named no one but has charged that some people with an intention to extort money resorted to defaming him.

He stated that a conspiracy was going on against him for the past three months by “creating” a fake CD (video) to finish him off politically and blackmail him.

“There are many people involved in it, amongst them a few hatched the conspiracy, became part of preparing the fake CD and released it on the internet to create political instability,” Mr Jarkiholi said in his statement.

Speaking to reporters, Mr Jarkiholi said he has decided to fight the case legally.

To a question on not naming anyone, he said he lodged the complaint on the instructions of legal experts.

Claiming that a criminal conspiracy was behind it, the former minister said he will make sure that everyone involved is brought out.

Earlier, in the day, the special investigation team, formed to probe the alleged sex scandal, detained a person from Vijayapura near Devanahalli in Bengaluru who was allegedly part of the conspiracy.

So far, six people have been detained including a hacker, police sources said.

Just two days ahead of the assembly session on March 4, a social activist lodged a complaint with police accusing Jarkiholi of exploiting a woman.

Dubbing it as “sex for job” scandal, video clips allegedly showing Ramesh Jarkiholi in a compromising position with an unidentified woman was widely aired by Kannada news channels.

Ramesh Jarkiholi rubbished them as fake and said there was a “deep conspiracy”. However, he stepped down as Water Resources Minister on moral grounds.