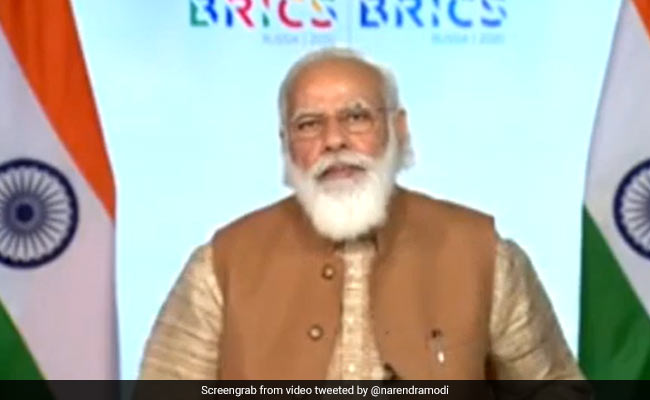 Prime Minister Narendra Modi has called on the global community to ensure that countries supporting and assisting terrorists are held responsible for their actions. Speaking at a BRICS summit on Tuesday evening, the Prime Minister took no names, but his statement has been viewed as a reminder about Pakistan’s continuing support of terrorist activities.

“Terrorism is the biggest problem the world is facing. We have to ensure that the countries that support and assist terrorists are also held guilty,” the Prime Minister said during the virtual meeting (because of the Covid pandemic) of the five member-nations.

This is the second time in less than a month that Prime Minister Modi has called for a concerted global push against terrorism. Last month he referred to the Pulwama terror attack – in which 40 Indian soldiers died for their country – and said “no one can benefit from terrorism and violence“.

In response to the Prime Minister’s speech Russian President Vladimir Putin, who hosted the summit, said: “… (there is) always a black sheep in the family… some people try to impose their own agenda.”

#Putin: Your Excellency Prime Minister @narendramodi, you said that in Indian culture the whole world is a common family. This is fundamental idea that we should be guided by | #BRICSSummit@MEAIndia@mfa_russiapic.twitter.com/Ma6PhmLmKx

Last month the Financial Action Task Force (FATF) retained Pakistan on a “grey list” of countries that had failed to act against terrorist organisations or those acting as fronts for terror agencies.

The country had not met six of 27 points it had to fulfill to win a reprieve and “needs to do more”, the global terror financing watchdog said, according to sources.

India has maintained Pakistan extends regular support to terror groups like Lashkar-e-Taiba and Jaish-e-Mohammed, and has repeatedly urged the FATF to take action against Islamabad.

Last week the government rejected a list of terrorists – released by a Pakistani federal agency – involved in the 26/11 Mumbai attacks. The list “glaringly omits” the mastermind and key conspirators, the Foreign Affairs Ministry said.

Prime Minister Modi’s call-to-action on Tuesday follows a subtle warning to Pakistan (and China, amid a prolonged and tense border stand-off in Ladakh) delivered last week during his annual Diwali interaction with soldiers. He advised against taking advantage of India’s tolerance and said its soldiers would give a “prachand jawab (fierce reply)” if borders were threatened.

In his address on Tuesday, meanwhile, the Prime Minister also touched upon the need to reform the United Nations Security Council (UNSC) in light of contemporary challenges.

The UNSC is the UN’s highest-decision making forum and the only one that can make legally-binding decisions like imposing sanctions. India, which has previously served seven terms as a non-permanent member and will start an eighth next year, has long made its case for a permanent seat.

In September, while addressing the UN General Assembly, the Prime Minister asked “Till when do we have to wait? Till when will India be kept away from the UN’s decision-making process?”