Courteney Cox Is Done With The Turkey Scene From F.R.I.E.N.D.S. So, She Did It Again – Unblendednews
Skip to content
Movies 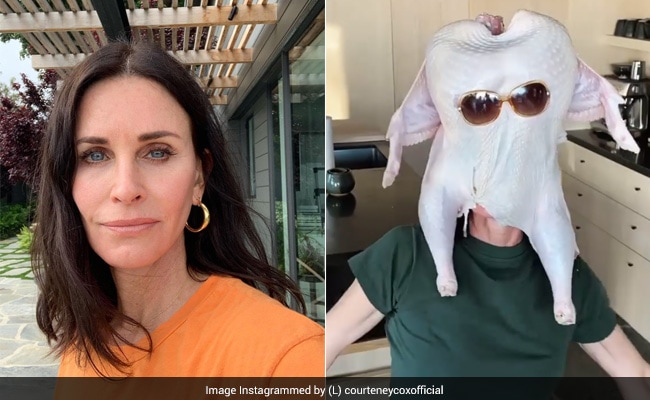 Courteney Cox in a still from her video (courtesy courteneycoxofficial)

Actress Courteney Cox, best known for playing the adorable and domineering Monica Geller in the iconic TV show F.R.I.E.N.D.S, did something unexpected. For F.R.I.E.N.D.S fans, Thanksgiving is synonymous with Monica Geller’s hilarious turkey dance. The scene features in Season 5, Episode 8 titled The One With All The Thanksgivings – in order to impress Chandler (played by Matthew Perry) in a goofy manner, Monica covers her head with an actual turkey and even puts on sunglasses. When that wasn’t funny enough, she performed a weird little dance which prompted Chandler to blurt out the three golden words: “I love you.” The turkey dance scene tops the list of iconic F.R.I.E.N.D.S moments.

22 years after the episode aired, Courteney Cox said in a video on Instagram that she’s had enough of people sending her gifts and tokens referencing that moment: “Happy Thanksgiving everyone. I hope you’re having a great day. I am feeling so thankful, and I if I get one more *beep* gift with that * beep* turkey dancing on my head, dancing like a fool, I’m gonna snap.”

And just when you think that was it, Courteney, 56 now, went ahead and did it again: “So, anyway. Since I am the symbol of Thanksgiving, here you go. Hope it makes you happy.”

Here’s the original scene a part of which Courteney recreated:

F.R.I.E.N.D.S made stars of its six principal actors – Jennifer Aniston as Rachel, Courteney Cox as Monica, Lisa Kudrow as Phoebe, David Schwimmer as Ross, Matthew Perry as Chandler and Matt Leblanc as Joey. The sitcom tracked the story of six friends living in New York City with a coffee shop named Central Perk as their prominent hang-out spot.