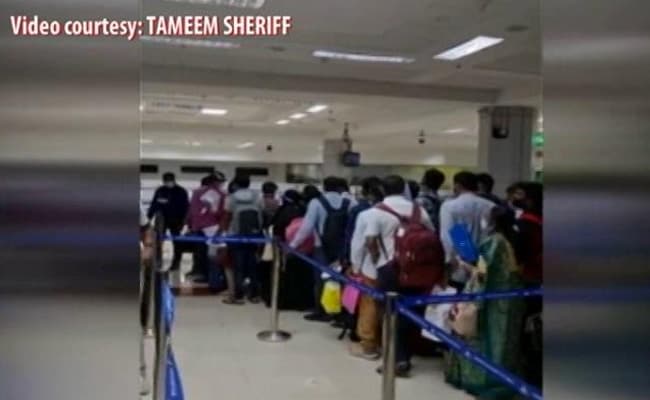 Chennai: The violation of COVID-19 protocol risks the potential formation of a virus cluster.

Hundreds of passengers jostling and maintaining no physical distance at the Chennai International Airport earlier today painted a scary image amid the coronavirus pandemic.

The incident happened when a large crowd gathered at the immigration counters of the airport after at least two flights from the Gulf region arrived around the same time.

Videos shared by passengers showed them jostling with each other, giving the protocol of physical distancing a miss. This violation risks the potential formation of a virus cluster.

Only passengers with RT-PCR negative test reports, obtained 72 hours before boarding, are currently being allowed to board international flights bound for India. For passengers from certain countries, RT-PCR testing is mandatory on arrival too.

Tameem Sheriff, a passenger who returned from Dammam in Saudi Arabia, described the experience as “scary”.

“No proper arrangements were made at the airport for Covid safety while so many restrictions were imposed,” he said.

Sharing videos of the crowd, he added, “There were just three immigration counters. Only after the passengers protested, they opened two more.”

When NDTV shared information regarding the videos and concerns expressed by passengers, airport authorities said the existing infrastructure is not designed to accommodate the Covid challenges. They also blamed the situation on the mandatory RT-PCR testing in some cases.

However, airport director D Sharad Kumar told NDTV that changes would be made tonight to avert a repeat. He said, “The Immigration Bureau has agreed to open at least four to five immigration counters from tonight onwards.”

Chennai, which accounted for around 6,500 daily cases when the second wave peaked in May, now records 200 cases on an average every day.

Tamil Nadu had crossed 38,000 cases during the peak and its tally now hovers around 1,500 cases daily with Coimbatore and Chennai accounting for the highest number of cases in the state.

The state has fully vaccinated only 11.7% of its 6-crore adult population while 46.7% of them have taken a single dose.