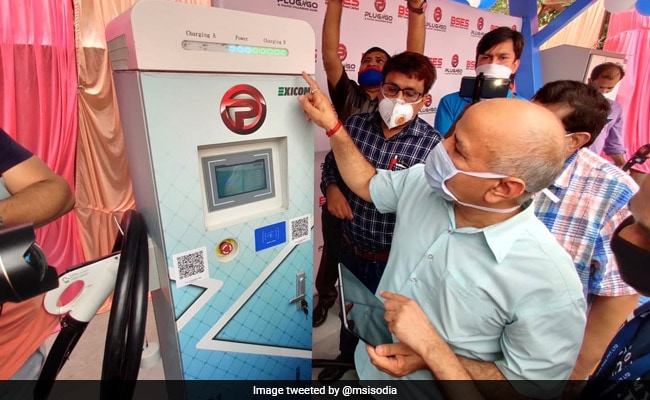 Delhi Power Minister Satyendar Jain has directed all buildings in the city such as malls, hospitals, hotels and those housing offices that have parking facilities with a capacity of more than 100 vehicles to reserve five per cent of that space for electric vehicles (EVs) and charging points.

“The larger parking spaces that have a capacity of 100 vehicles have been directed to reserve five per cent of the area for electric vehicles so that people can have a charging facility,” Mr Jain told reporters on Friday.

With this, the city can have more than 10,000 charging points for EVs by December, a government official said.

“The power minister has directed all buildings such as malls, shopping complexes, cinema halls, multiplexes, office spaces, hotels, restaurants and hospitals that have a parking capacity of more than 100 vehicles to set aside at least five per cent of it for EVs, along with suitable slow EV chargers,” he said.

The buildings are expected to be given time till December to incorporate these facilities, the official added.

Under the Delhi EV policy, a subsidy of up to Rs 6,000 per charging point can be availed by these buildings, he said.

Last week, Delhi Transport minister Kailash Gahlot had appealed to the malls, corporate houses, cinema halls, hotels and market complexes in the national capital to set up charging stations for EVs on their premises.

In the fifth week of the ongoing “Switch Delhi” campaign for promoting adoption of EVs to replace the fossil fuel-driven, pollution-causing vehicles, the government is focussing on charging stations.

The city currently has 72 charging stations for EVs.

Mr Jain said in the first phase, 500 charging stations will be set up at 100 locations across Delhi.

The Delhi Electricity Regulatory Commission (DERC) has notified a policy, wherein commercial buildings such as hotels and malls providing charging facilities to EVs can install a sub-meter and the EV tariff rate will apply to those, Mr Gahlot had said earlier.

The Aam Aadmi Party (AAP) government in Delhi aims to set up EV charging stations every three kilometres, he had said, adding that anyone who wants to use electricity for EV charging can install a sub-meter.

The charging rates for EVs, which are lower than the commercial rates, will apply to these sub-meters, which is a big relief for those who want to install charging points, Mr Gahlot had said.