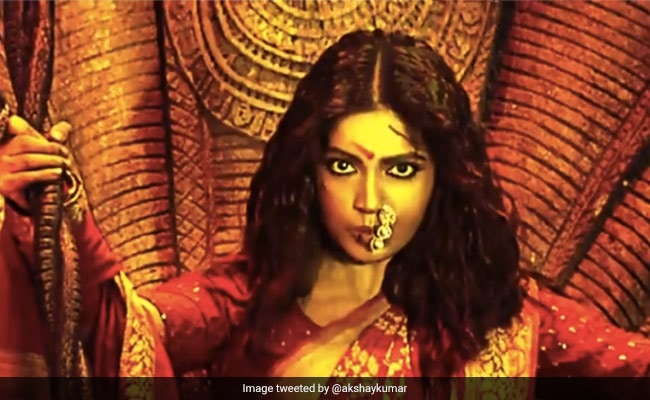 Akshay Kumar, who is one of the producers of the forthcoming film Durgamati, shared an update on the horror comedy that features Bhumi Pednekar in the lead role. The film, which was earlier titled Durgavati, is slated to release on Amazon Prime Video (more on that later). Akshay Kumar shared a new motion poster of the film along with the reminder that the film’s trailer releases tomorrow. The new poster of Durgamati features Bhumi Pednekar in a spooky look. Bhumi, dressed in a red saree, can be seen sitting on a throne as she intensely stares at the camera. She can be seen sporting loud make-up to give her a spooky appeal. Akshay Kumar shared the post and he wrote: “It’s payback time! Get ready to meet Durgamati on prime on December 11. Trailer out tomorrow.”

This is what Akshay Kumar posted:

On Monday, the makers of the film shared a brand new poster of the film along with its new title. Take a look:

Last year, Akshay Kumar announced Bhumi Pednekar’s association with the film and he tweeted: “Excited to announce Bhumi Pednekar in and as Durgavati. A scary-thriller, going on floor mid-January. Presented by Cape Of Good Films and Bhushan Kumar, produced by Vikram Malhotra and directed by Ashok. Need your love and luck.” Bhumi Pednekar co-starred with Akshay Kumar in the 2017 hit film Toilet: Ek Prem Katha.

EXCITED to announce @bhumipednekar in & as #DURGAVATI. A scary-thriller, going on floor mid-January. Presented by #CapeOfGoodFilms and @itsBhushanKumar, produced by @vikramix and directed by Ashok. Need your love and luck @TSeries@Abundantia_Entpic.twitter.com/VsOpXFN6YG

Durgamati is a Hindi remake of the Telugu film Bhaagamathie. Besides Bhumi Pednekar, the film also features Arshad Warsi and Karan Kapadia.