Hema Malini and Dharmendra’s younger daughter Ahana Deol‘s family has been joined by two new members. Ahana Deol and husband Vaibhav Vohra welcomed twin girls on November 26 – they shared the baby news in an Instagram story. “We are blessed to announce the arrival of our twin girls, Astraia and Adea Vohra. Born on – 26 November 2020. Proud parents Ahana and Vaibhav Vohra. Excited Brother Darian Vohra. Overjoyed grandparents Pushpa and Vipin Vohra, Hema Malini and Dharmenrdra Deol,” Ahana Deol wrote in her Instagram story. Ahana and Vaibhav are also parents to a son named Darian, who was born in 2015, a year after their wedding.

Here’s how Ahana Deol made the big announcement: 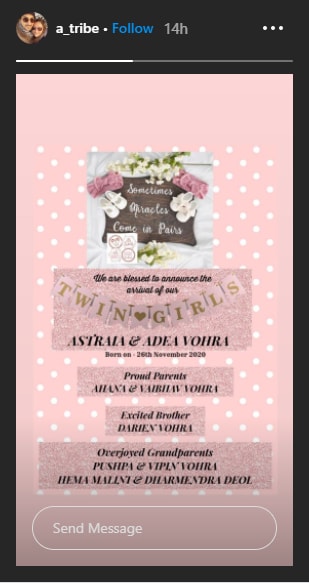 Last year, Hema Malini and Dharmendra, along with Esha Deol and Bharat Takhtani attended Ahana Deol’s housewarming party and photos from the family gathering trended for days. “Warming up our new home with the best kind of vibes,” Ahana had captioned one of her posts.

Canada Hospitals Use Drones To Carry Lungs For Transplant

Planning To Invest In Cryptocurrencies? Here Are Risks and Opportunities

Sensex, Nifty Likely To Have A Positive Opening; Reliance Industries To Be In Focus