Shibani Dandekar, who was in Maldives along with her boyfriend Farhan Akhtar, has actively been sharing posts from their vacation on her Instagram profile. On Tuesday, she posted an underwater picture with the actor and she captioned it: “My buddy on land and under the sea! Also in the pool because that’s where we are in this picture.” Farhan Akhtar’s daughter Akira, who was also in Maldives (going by Farhan Akhtar’s post), wrote this on Shibani Dandekar’s post: “Also the pool me and my best friend who’s a sleeping turtle and I will leave.” Shibani, replying to her comment, wrote: “You are pro level. Some of us need work.”

Here’s a screenshot of Shibani and Akira’s Instagram exchange: 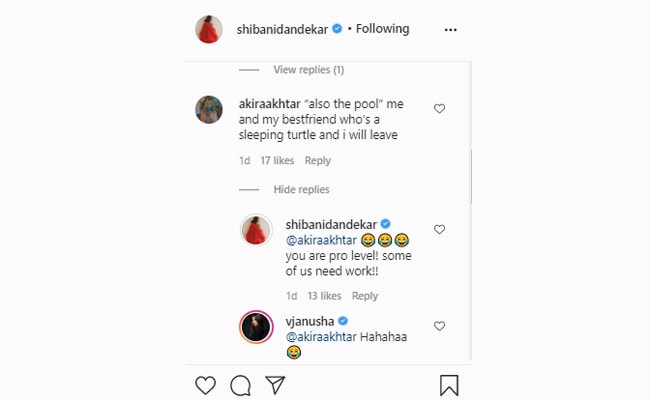 Earlier this month, Farhan Akhtar posted a picture of Shibani and Akira and he captioned it: “Beach-o-beech. #faroutdoors #maldives #mightaswelljump.” ICYMI, this is the post we are talking about:

Farhan  had his daughters Shakya and Akira with celebrity hairstylist Adhuna Bhabani. Farhan married Adhuna in the year 2000 and they got divorced in April 2017.

India U19 vs Bangladesh U19, U19 World Cup 2022 Quarter-Final: When And Where To Watch Live Telecast, Live Streaming | Cricket News