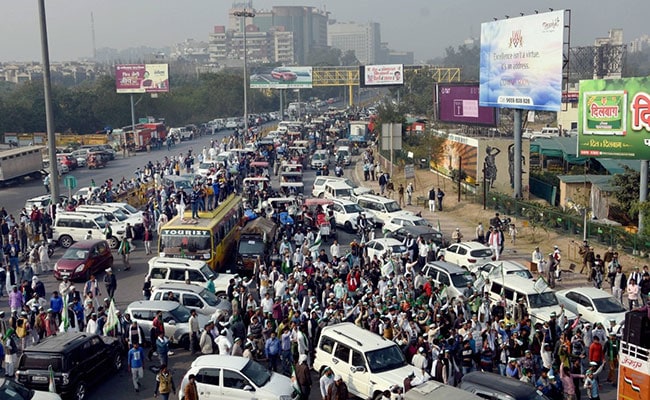 Farmers’ Protests Today: The protest has entered the ninth day.

Talks between three union ministers and a representative group of thousands of agitating farmers failed to yield any resolution on Thursday, as the union leaders stuck to their demand for the repeal of new farm laws and even refused the lunch, tea, and water offered to them during almost eight-hour-long hectic parleys.

On its part, the government assured the group of nearly 40 farmer leaders that all their valid concerns would be addressed, but the other side flagged several loopholes and deficiencies in the laws, which they said were passed hastily in September.

The Agriculture Ministry tweeted that doubts of farmers were addressed by Agriculture and Farmers Welfare Minister Narendra Singh Tomar, who led the government side at the talks.

Narendra Singh Tomar told reporters that the next meeting will take place on Saturday at 2 pm.

Here are the live updates on farmers’ protests:

Farmers Protest: Farmers Refuse Lunch At Meet With Government
Representatives of the farmers’ organisations which are having a crucial meeting with the government, refused to break bread with the three participating Union ministers on Thursday. At the lunch break, farmers said “no” to the food offered by the government and stuck to the langar, which was brought in by a waiting van. Visuals from inside Vigyan Bhawan, where the meeting is being held, showed the farmers’ representatives assembled at a long table for a hurried lunch. Some sat on the ground in a quiet corner.
Farmers Protest Updates: Speculations About Closure Of Mandis, Support Price System Misleading, Says Shivraj Singh

Chief Minister Shivraj Singh Chouhan has said that the speculations about the closure of mandis and support price system are misleading and untrue and farmers should not pay attention to such speculations. Families occupying one-two acres of agricultural land in the state for 50 years will be given pattas. Online arrangements will be made soon for all land-related records, the Chief Minister stated.

“Back Off From Rigid Stand, Listen To Farmers”: Harsimrat Kaur To Centre
Half the protest of farmers will be over if the minimum price guaranteed by the government (MSP) is made a right by law, Akali Dal’s Harsimrat Kaul Badal said on Thursday, questioning, “What’s wrong in giving the people what they are asking for”. The government, she said, had missed the bus for resolving the issue before it blew up and now, instead of “standing on its ego”, it should “listen to the farmers and bring in a bill which would be welcomed by all”. Read Here
Members of Civilian Welfare Charitable Trust distributed medicines to protesting farmers stationed at Singhu border (Delhi-Haryana border), earlier today.

“In case of emergency, these medicines can be used by our farmer brothers,” says a member of the trust. pic.twitter.com/Q6MjxCidIU