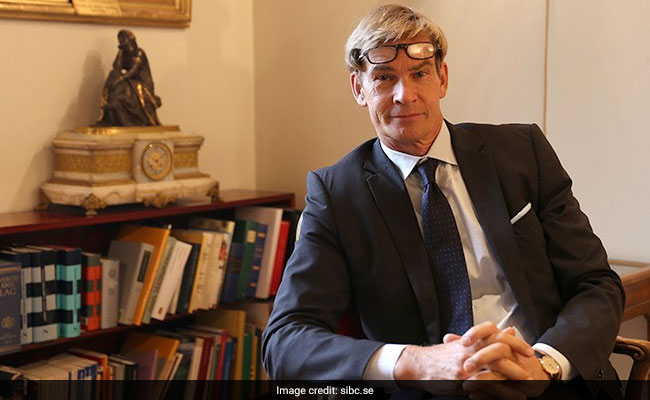 Acknowledging India’s role as the “pharmacy to the world”, leading European nation Sweden said it is focusing on expanding bilateral cooperation in the areas of health and life sciences in view of the coronavirus pandemic.

Swedish Ambassador Klas Molin also said Sweden and India stand “firmly and unequivocally” in the fight against terrorism even as he noted the growing Indian role in the Indo-Pacific region.

On the long-pending free-trade agreement between India and the European Union, the envoy said there is still some work to be done in calibrating expectations and scope on both sides, noting that it will be mutually beneficial for both sides.

Mr Molin told PTI that overall bilateral ties between India and Sweden have been excellent and that both sides are looking at broader cooperation in eight key areas including innovation, trade and investments, health and defence.

“The pandemic has focused our thinking, and our cooperation in health and in life sciences has increased.

“India is the pharmacy to the world and some of our companies, some already established here, some venturing here now, are looking for new matchups,” the ambassador said.

“AstraZeneca is a well-known example, currently in phase three trials for a COVID-vaccine, but also researching and developing in India in other areas,” he said.

India has supplied medicines and other medical assistance to over 150 countries in the last few months to help them deal with the coronavirus pandemic at a time when the country itself was reeling under its impact.

As the world anxiously waits for a COVID-19 vaccine, British-Sweden pharmaceutical company AstraZeneca Plc and the University of Oxford are holding trials of a vaccine candidate.

In India, AstraZeneca is partnering with the Serum Institute of India (SII) for the potential vaccine.

To a question on security issues, Mr Molin said that India and Sweden stand together firmly and unequivocally in the fight against terrorism.

He also noted that “India is taking on a growing role in the Indo-Pacific and is deepening its cooperation with other countries, both regional and from outside, in order to protect its interests and guarantee free navigation of and safe maritime passage in international waters”.

“The international community has an interest in protecting these common goods as well as in combating terrorism,” he added.

On the border row between India and China in eastern Ladakh, the ambassador said tensions of “this kind” that lead to the loss of lives are “naturally very serious”. “I think it’s safe to say that there have already been some repercussions and consequences, for instance in the economic and tech fields.

“Hopefully, the talks underway will lead to a de-escalation and a more stable situation,” he said.

Asked about the proposed India-EU FTA, Molin hoped that the decisions taken at this year”s summit between the two sides will pave the way for the resumption of negotiations.

“We firmly believe that an FTA would be mutually very beneficial. There is still some work to be done in calibrating expectations and scope on both sides.

“This year’s EU-India Summit opened on a high-level economic dialogue. Hopefully, this will pave the way for resumption of negotiations,” he said.

The FTA talks have been stalled since May 2013, when both sides failed to bridge substantial gaps on crucial issues, including data security status for the IT sector. Launched in June 2007, negotiations for the proposed agreement have witnessed many hurdles.

Asked how the overall ties progressed after the visit of Swedish King Carl XVI Gustaf and Queen Silvia to India last year, the ambassador said the relations have been “excellent” and it was reflected in the visit.

“The pandemic has meant that some of the contacts have been focused on new areas as we try to help each other cope with this unprecedented challenge,” he said.

The ties between India and Sweden are on an upswing in the last few years. In April 2018, Prime Minister Narendra Modi visited Stockholm during which both sides agreed to further deepen innovation partnership for a sustainable future.

It was a visit to Sweden by an Indian prime minister after nearly three decades.

“We are also envisaging a virtual interaction between Swedish Trade Minister Anna Hallberg and the 200 plus Swedish companies in India, where the minister would give her outlook on global trade and investment scenarios, and more specifically trends for Sweden and Swedish industry in the ongoing pandemic,” he said.