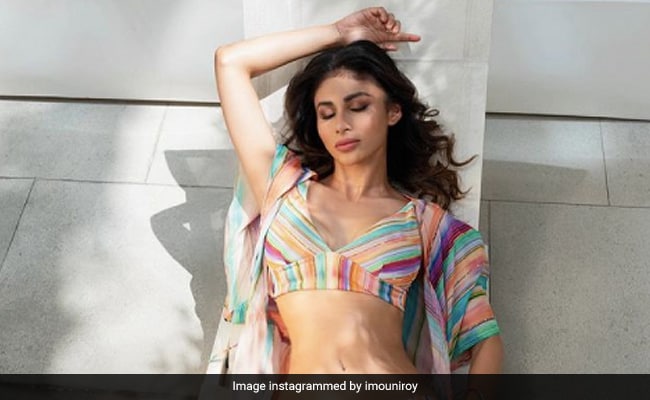 Actress Mouni Roy, who often trends for her stunning Instagram photos, revealed her weekend plans in a post on Saturday. Sharing a glimpse of her weekend mood, the 35-year-old actress said her Saturdays are reserved for some lazing around and Sundays are all for “cuddles.” Mouni’s weekend mood translated into a photo – fabulous as usual – in which she can be seen soaking up the sun in a striped bikini. “Saturdays for siestas Sundays for cuddles,” wrote Mouni Roy. Apart from setting weekend goals, Mouni Roy’s lounge wardrobe is also pretty envy-inducing. Mouni Roy set major swimwear goal for her friends, who asked her in the comments section – Disha Parmar wrote: “I want this bikini too.”

Mouni Roy is also a poet at heart, who loves to cuddle up in bed with a good book. “To all the girls who read by flashlights, Who see dragons in the clouds, Who feel most alive in the worlds that never were, Who know magic is real, Who dream,” she described one of her moods.

Mouni Roy was recently holidaying in the Maldives recently, from where she shared these postcard-like memories.

Mouni Roy has been a part of television shows such as Kasturi, Devon Ke Dev…Mahadev and Naagin. She has also participated in reality shows like Nach Baliye 6, Jhalak Dikhhla Jaa 7 and Zara Nachke Dikha. She stepped into Bollywood with the 2018 sports drama Gold, starring Akshay Kumar. Her last film was Made In China, in which she co-starred with Rajkummar Rao. The actress will next feature in Ayan Mukerji’s Brahmastra, in which she will share screen space with Amitabh Bachchan, Ranbir Kapoor and Alia Bhatt.