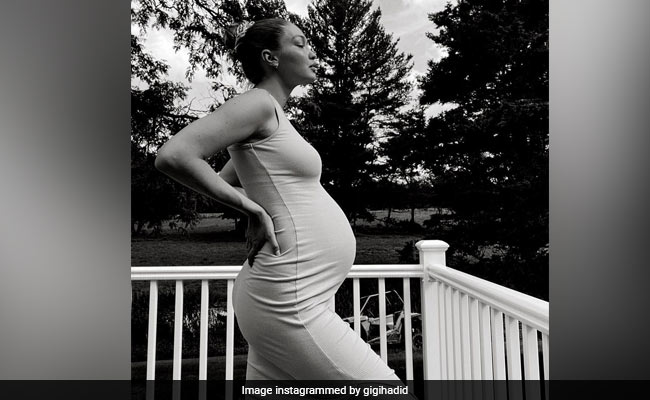 Gigi Hadid shared a few throwback pictures from her maternity diaries. The supermodel and her boyfriend and singer Zayn Malik  welcomed their first child together – a daughter in September. Gigi posted pictures from her pregnancy days on social media and she captioned them. “August, waiting for our girl.” In the picture, Gigi, dressed in a white outfit can be smiling for the camera. One of the shots also features Zayn Malik posing with the baby bump. The couple’s fans filled up the comments section of her post with heart emojis and wishes for them and their daughter.

The couple shared this post on becoming parents and they wrote: “Our girl joined us earth-side this weekend and she’s already changed our world. So in love.”

Earlier this year, the supermodel made an appearance through a video call on Jimmy Fallon’s The Tonight Show, where she confirmed the news of her pregnancy with Zayn Malik. In the video, an excited Gigi  said, “Obviously, we wish we could have announced it on our own terms. But we’re very excited and happy and grateful for everyone’s well wishes and support.”

Gigi and Zayn Malik reportedly rekindled their relationship in December, last year. Gigi made it Instagram official of sorts by posting a picture of former One Direction member on her Instagram story and she wrote: “Hey Valentine… Z on the farm.” They first started dating in 2015. However, they split in March 2018. The couple reportedly got back together in December, last year and were spotted together in New York on several occasions in January, this year.

Gigi Hadid, a popular name in the American fashion circuit, has walked the ramp for ace designers like Marc Jacobs, Chanel, Michael Kors, Jean Paul Gaultier, and Max Mara, to name a few.