Anushka Sharma is due this month

Actress Anushka Sharma who is expecting her first child with cricketer Virat Kohli is due this month. Even though she is conceiving for the first time, the 32-year old looks far from being overwhelmed. She sweats it out in the gym, she does not miss her yoga sessions, and when cravings hit, she doesn’t shy away from indulging either. On Thursday afternoon, the actress shared an Instagram story from her Mumbai residence where she can be seen surrounded by two boxes of yummy pizzas. On Anushka’s plate, we saw slices of cheese and pesto pizza, and Margherita pizza. The thin crust pizzas were ordered in from Italian fine-dining restaurant Gustoso. ‘Go big or go home’ Anushka captioned the image. 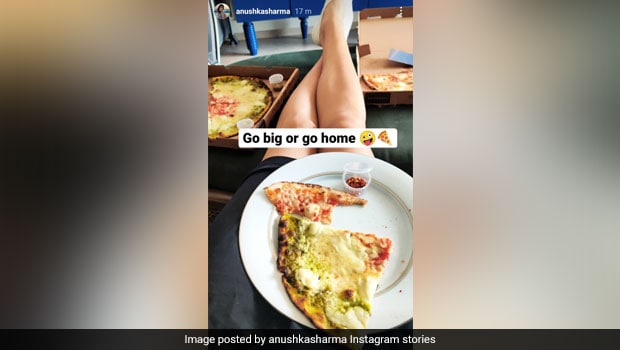 Anushka Sharma is riding high on the success of two of her OTT productions ‘Bulbull’ and ‘Pataal Lok’. The latter also bagged many awards at a major awards show that took place in Mumbai recently. Anushka Sharma was last seen in ‘Zero’ opposite Shahrukh Khan and Katrina Kaif. She also did a special appearance in a song that featured in ‘Angrezi Medium’ that released last year.

Anushka Sharma would be playing the role of cricketer, Jhulan Goswami, in the ace bowler’s biopic. The shooting had to be stalled due to the pandemic. Anushka Sharma also accompanied husband Virat to UAE for the IPL; the couple is in Mumbai now.