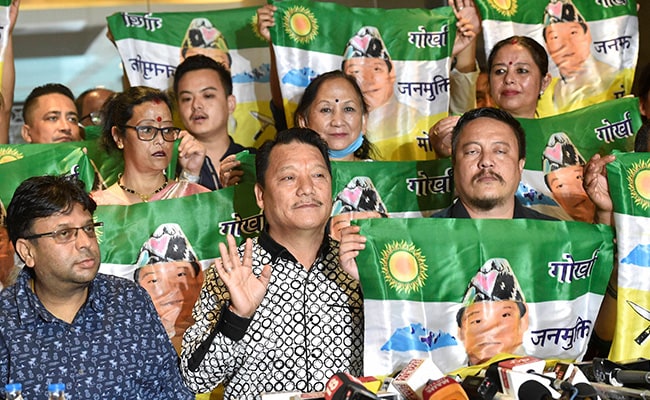 Politics in Darjeeling is set to heat up. Fugitive Gorkha Janmukti Morcha leader Bimal Gurung, who has consistently demanded a separate state of Gorkhaland, will return to the district on December 6 and hold a rally in the plains in Siliguri town.

This was announced by his party colleague Roshan Giri who flew into Siliguri today.

“Our party is with the aspirations of the hill residents,” Mr Giri said after landing at Bagdogra airport, which falls under the Siliguri subdivision of the district. He was welcomed by supporters of the Gurung faction of the Gorkha Janmukti Morcha (GJM) at the airport.

Bimal Gurung and Mr Giri had fled Darjeeling in September 2017 after violence that led to the killing of a police officer.

Over 120 cases were filed against Mr Gurung who was the reigning Gorkha Janmukti Morcha leader with the support of BJP.

He surfaced in Kolkata on October 21 and swore loyalty to West Bengal Chief Minister Mamata Banerjee.

These developments have once again stoked tension in Darjeeling where Mr Gurung’s former colleague Binay Tamang has been in charge for the last three years with Mamata Banerjee’s support.

Mamata Banerjee called him for talks in Kolkata on November 4 and Mr Tamang said the talks were fruitful but Mr Gurung’s attempt to return to Darjeeling is likely to send political temperatures soaring in the hills.

“Mr Gurung will possibly reach Siliguri on 6th December. We have got permission to hold a rally at a ground here if that is too small we will look for another location,” Mr Giri said.

On the issue of Gorkhaland, he said that the party would support anyone who promises a separate state in the general elections of 2024.

On Binay Tamang currently in charge of the hills, Mr Giri said, “Under Tamang and his associate Anit Thapa, there has been a lot of corruption and nepotism in Darjeeling.”

Gorkha Janmukti Morcha flags have already been put up at the Kurseong Motor Stand, where the rally will be organised, and some other places in the hills, news agency PTI reported.

“India is a democratic country and anyone can go anywhere lawfully,” Anit Thapa, one of the leaders of Mr Gurung’s rival GJM faction, said while responding to Roshan Giri’s return.