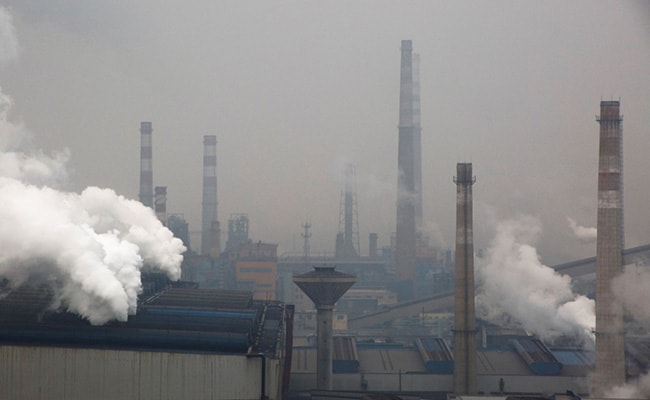 Emissions are the main factor that determine the amount of greenhouse gas levels. (File)

Greenhouse gases in the atmosphere, the main driver of climate change, hit record highs last year and have continued climbing this year, despite measures to halt the pandemic, the UN said Monday.

The World Meteorological Organization (WMO) said lockdowns, border closures, flight groundings and other measures to rein in the coronavirus crisis had indeed cut emissions of many pollutants and greenhouse gases like carbon dioxide.

But it warned the industrial slowdown due to the pandemic had not curbed record concentrations of the greenhouse gases that are trapping heat in the atmosphere, raising temperatures, causing sea levels to rise and driving more extreme weather.

“The lockdown-related fall in emissions is just a tiny blip on the long-term graph,” WMO chief Petteri Taalas said in a statement.

“We need a sustained flattening of the curve.”

The WMO’s main annual Greenhouse Gas Bulletin said preliminary estimates indicated that during the most intense period of the shutdowns, daily CO2 emissions may have been reduced by as much as 17 percent globally.

The annual impact was expected to be a drop of between 4.2 and 7.5 percent, it said.

But this will not cause concentrations of CO2 in the atmosphere to go down, it said, warning the impact on concentrations was “no bigger than the normal year to year fluctuations.”

CO2 concentrations will continue to rise, albeit at a slightly reduced pace, WMO said, adding that the pace would be no more than 0.23 parts per million (ppm) per year slower than the previous trajectory — well within the 1.0 ppm natural inter-annual variability.

“On the short-term the impact of the Covid-19 confinements cannot be distinguished from natural variability,” it said.

Emissions are the main factor that determine the amount of greenhouse gas levels but concentration rates are a measure of what remains after a series of complex interactions between atmosphere, biosphere, lithosphere, cryosphere and the oceans.

CO2 is by far the most important long-lived greenhouse gas in the atmosphere related to human activities, and is responsible for roughly two-thirds of the Earth’s warming.

Taalas pointed out that the world breached the global threshold of 400 ppm in 2015, voicing alarm that “just four years later, we crossed 410 ppm.”

“Such a rate of increase has never been seen in the history of our records.”

The United Nations agency said that since 1990, there had been a 45-percent increase in so-called radiative forcing, which is the warming effect on the climate by greenhouse gases.

“Carbon dioxide remains in the atmosphere for centuries and in the ocean for even longer,” Taalas said.

“The last time the Earth experienced a comparable concentration of CO2 was three to five million years ago,” he said, pointing out that at that time global temperatures were two to three degrees Celsius warmer and sea levels were 10-20 metres higher than now.

“But there weren’t 7.7 billion inhabitants,” he said.

The second most prevalent greenhouse gas in the atmosphere is methane — emitted in part from cattle and fermentation from rice paddies — which is responsible for around 16 percent of warming.

In 2019, methane levels were at 260 percent of pre-industrial levels, at 1,877 parts per billion (ppb), with the rise from 2018 slightly lower than the previous annual increase, but still higher than the 10-year average, WMO said.