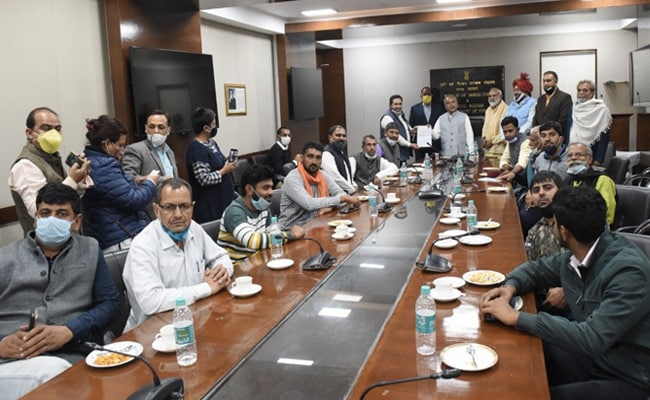 A section of Haryana farmers have broken ranks with their counterparts from Punjab and other states, accepting in writing that they want the farm laws to stay, but with amendments. Representatives of three groups, which claimed to cumulatively represent 1,20,000 farmers from the state, met agriculture minister Narendra Tomar this evening, ahead of tomorrow’s all-India strike by farmers and the sixth meeting between the farmers and the Centre on Wednesday.

In the last meeting with the government on Saturday, the farmer representatives had turned down the offer of amendment in the three farm laws, contending that they would not accept anything other than their scrapping.

Thousands of farmers from Punjab and Haryana have been camping out at the borders of Delhi for more than 10 days in the intense cold, having reached there braving tear gas, water cannons, police batons and barricades. Over this period, three farmers have died.

The farmers, however, have maintained that they would not capitulate on their demands. Many said they were prepared for a long haul and would not return home till they achieved their objective.

Dharmendra Arya, member of a Jhajjar-based FPO, who met Mr Tomar today, said, “The laws brought by the government should not be withdrawn but amendments should be made as also demanded by the farm unions… The new laws empower the new farmers to sell their produce in open market”.

“Currently the farmers sitting on protest face harassment by commission agents. The Centre purchases wheat and paddy from farmers of Punjab and Haryana at MSP but for a limited period of time in each season. If markets are opened, we can sell other crops through online merchants. We also demand the govt to ensure that crops are sold at MSP,” he added.

Reacting to the FPO farmers’ move, Gurnam Chadhuni, a leader of the Bharatiya Kisan Union from Haryana, said, “This is a ruse of the government to divert the ordinary farmers”.

FPOs or Farmer-Producer Organisations are organisations built by the government, he said. The farm laws do not affect FPOs and the farmers are there “under the pressure of the government,” he said. “There were plans from the beginning and this is just a show,” he added.

An acceptance of an amended version of the farm laws will be a face saver for the government, which has been under intense pressure over the laws since the protest started in September.

No resolution has been in sight for the deadlock despite five rounds of meetings with farmers and a series of internal meetings of the government, where Union Home Minister Amit Shah and Prime Minister Narendra Modi have also been involved. A fresh proposal from the Centre is expected during Wednesday’s meeting.

The all-India strike scheduled for tomorrow, meanwhile, has gathered huge support, not just from opposition parties but also trade and transport unions and a host of other organisations. Farmers who have assembled at the borders of Delhi said they would stop entry to the national capital and only allow passage for emergency services.