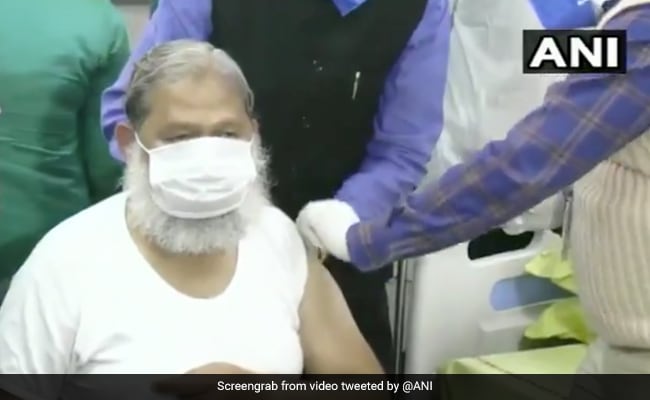 Haryana Health Minister Anil Vij was administered a trial dose of a coronavirus vaccine today in a hospital in the state’s Ambala Cantonment. The third phase trial of Bharat Biotech’s Covaxin began in Haryana today.

Just days ago, the 67-year-old minister had announced on Twitter that he will be the first volunteer in his state for the anti-Covid vaccine.

The senior BJP leader tweeted on Thursday: “I will be administered a trial dose of Coronavirus vaccine Covaxin a Bharat Biotech product Tomorrow at 11 am at Civil hospital, Ambala Cantt under the expert supervision of a team of doctors from PGI Rohtak and Health Department.”

#WATCH Haryana Health Minister Anil Vij being administered a trial dose of #Covaxin, at a hospital in Ambala.

He had offered to be the first volunteer for the third phase trial of Covaxin, which started in the state today. pic.twitter.com/xKuXWLeFAB

Bharat Biotech had on Monday announced the commencement of Phase III trials of Covaxin, involving 26,000 volunteers across India. The trials will be conducted in partnership with the Indian Council of Medical Research (ICMR) and will be the largest clinical trial conducted for a COVID-19 vaccine in India, according to news agency ANI. The trial has been approved by the Drugs Controller General of India.

Covaxin has been evaluated in about 1,000 subjects in Phase I and Phase II clinical trials, with promising safety and immunogenicity data.

In Haryana, Pandit Bhagwat Dayal Sharma University of Health Sciences in Rohtak and ESIC hospital in Faridabad have been identified among those sites across India where trials will be conducted, as per Bharat Biotech’s statement cited by ANI.

The Phase 3 trial of Covaxin will involve 26,000 volunteers across 25 centres in India and is being conducted in partnership with the ICMR, the company had said.

The human trial of Covaxin had begun at Rohtak’s Post Graduate Institute of Medical Sciences in July, Anil Vij had said earlier.