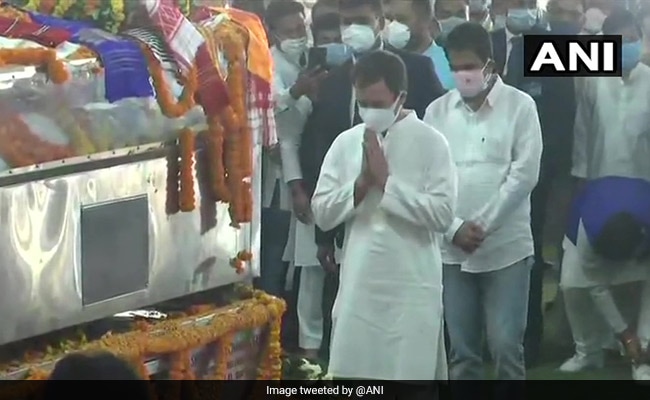 He was my guru, my teacher, Congress leader Rahul Gandhi said after paying floral tribute to former Assam Chief Minister Tarun Gogoi, who died at the age of 86 on Monday.

“He did a great service for Assam. He did a tremendous service for the entire country. I spent many hours working with Mr Gogoi. He was my teacher, my guru and he explained to me like nobody can what Assam is, who its people are, the complexities and the beauty of this state,” said Mr Gandhi who was accompanied by the veteran Congress leader’s son, Gaurav Gogoi.

“His demise was a personal loss to me. Gogoi ji was not just a leader of Assam, he was a national leader… a formidable chief minister. He inspired us by uniting the people of Assam and bringing peace to the state… When I first came to Assam, I was young and roaming freely. Then I sat with Gogoi ji and he taught me humility in five minutes… He was the guru who taught his students the art of politics well. So, it won’t be tough for us to fight in Assam,” he told reporters.

Mr Gandhi reached Guwahati on Wednesday afternoon on a special flight from Goa, and headed straight to the Srimanta Sankardeva Kalakshetra, where Mr Gogoi’s body has been kept for people to pay their last respect.

He also visited the late leader’s family, including wife Dolly and son who is a Lok Sabha MP from Assam.

“Gogoi ji was not just a leader of Assam, he was a national leader… a formidable chief minister. He inspired us by uniting the people of Assam and bringing peace to the state,” Mr Gandhi told reporters.

Former Assam chief minister Tarun Gogoi, who had been battling for his life with post-Covid complications in a hospital for weeks, died on November 23. A three-day state mourning was announced in his Mr Gogoi’s honour as tributes poured in from leaders across political parties.

Mr Gogoi was a trained lawyer, and was handpicked by Indira Gandhi to lead the Youth Congress in 1971. He grew to be a close confidant of prime minister Rajiv Gandhi and was Union Minister twice between 1991and 1995. He was also the member of the fifth, sixth, seventh, tenth, twelfth and thirteenth Lok Sabha.

On Monday, when Mr Gogoi’s health took a turn for the worse, doctors at the Gauhati medical college and hospital allowed his family to play old memories, including speeches of Mrs Indira Gandhi, to him.

“Tarun Gogoi should be remembered for his smile, his ideals and commitment to the people of the state,” his son and Lok Sabha MP Gaurav Gogoi had said.