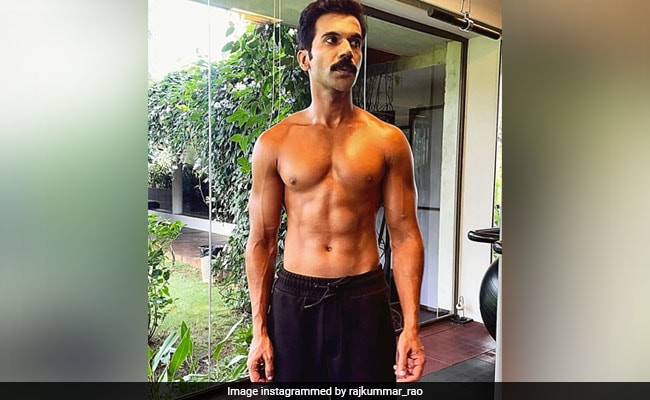 Rajkummar Rao, who is gearing up for the release of his upcoming film Badhaai Do, has been prepping for his role to achieve a perfect physique. The actor’s latest Instagram post is a new addition to his body transformation journey. On Friday, Rajkummar posted a shirtless picture of himself. He is sporting a mustache in the photo. In the caption, the Stree actor shared his experience of his body transformation journey with a purely vegetarian diet. Rajkummar, who will play the role of Shardul Thakur, a cop in Badhaai Do, wrote, “It wasn’t easy to get this transformation, but nothing seems impossible when you love what you do…”

Speaking about the film, the actor shared that the project is “really close” to his heart and he had a blast while shooting for it.

His caption reads, “#ShardulThakur in #BadhaaiDo. Being a pure vegetarian and to strictly avoid any kind of steroids, it wasn’t easy to get this transformation but nothing seems impossible when you love what you do. #BadhaaiDo is a film which is really close to my heart and we had a blast shooting this film.”

Rajkummar keeps sharing pictures of his body transformation journey on Instagram and these posts say it all. Check them here.

Badhaai Do is a sequel to Badhaai Ho, a film which released in 2018. The 2018 film featured Ayushmann Khurrana and Sanya Malhotra in lead roles. Neena Gupta, Gajraj Rao and Surekha Sikri played pivotal roles in the movie. It was directed by Amit Sharma.

Speaking of Badhaai Do, Rajkummar Rao has been paired opposite Bhumi Pednekar in the upcoming film. Bhumi will play the role of Sumi, a physical education teacher. Badhaai Do is directed by Hunterrr (2015) director Harshavardhan Kulkarni.

Rajkummar Rao’s recently-released film Roohi is running in theatres. It was released on March 11. The movie also features Janhvi Kapoor and Varun Sharma. Bhumi Pednekar, on the other hand, was last seen in the Amazon Prime film Durgamati in 2020.