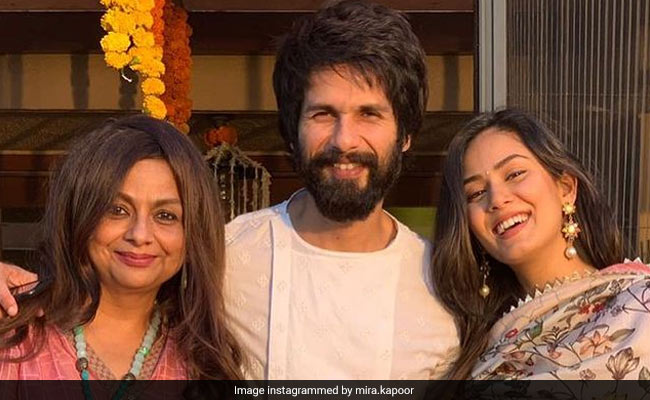 As Bollywood veteran Neelima Azeem celebrates her 62nd birthday today, her family members wished her on social media, expressing their love for her. The first wish arrived from her son and Bollywood actor Shahid Kapoor, who posted a picture of the actress and he wrote: “Mom… I love you …Happy, happy birthday.” Meanwhile, Neelima Azeem’s daughter-in-law Mira Rajput shared an elaborate wish on Instagram. She posted a picture of the birthday girl. Another photograph featured Neelima Azeem with son Shahid and daughter-in-law Mira Rajput. Here’s what Mira Rajput wrote in the greeting: “Happy Birthday to the world’s best Dadi. Pied piper to the kids, lioness mama to her cubs and my forever friend. We love you Mom. Stay happy, keep dancing through life and may your gift of storytelling never tire.”

Shahid Kapoor, son of actors Pankaj Kapur and Neelima Azeem, married Mira Rajput in July in 2015.Their daughter Misha was born a year later in August. Shahid and Mira are also parents to a son named Zain, who they welcomed in the year 2018. Shahid Kapoor is a star of films like Udta Punjab, Haider, Jab We Met, “Padmaavat” and Ishq Vishk. His last film was the 2019 hit Kabir Singh. The actor will next be seen in Jersey, in which he stars as a cricketer.

Neelima Azeem’s son Ishaan Khattar with her ex-husband Rajesh Khattar is also a Bollywood actor. He made his acting debut with Beyond The Clouds and has starred in films like Dhadak and Khaali Peeli. He also starred in the web-series A Suitable Boy, directed by Mira Nair. Ishaan will next be seen in Phone Bhoot.