Only 32% of the total population in India is fully vaccinated.

India vaulted 19 spots in Bloomberg’s Covid Resilience Ranking of the best and worst places to be amid the pandemic, marking a turnaround for a country that saw the world’s fastest-growing Covid outbreak earlier this year.

The South Asian country is now ranked 26th in the monthly snapshot, which measures where the virus is being handled the most effectively with the least social and economic upheaval. The league table assesses 53 major economies on 12 datapoints related to virus containment, the economy and opening up.

India’s improved showing is largely due to a rapid economic reopening after daily infections dropped and an initially sluggish vaccination drive picked up steam. The country has now administered more than a billion doses.

High levels of natural immunity are also potentially at play in the country in curbing infections, with some serological surveys putting previous infection rates as high as 97% in some areas. After reporting a world-record of 400,000-plus cases a day in early May as the delta variant ripped through the crowded nation of almost 1.4 billion people, pushing its health care system to near collapse, new infections have now dropped to less than 7,000.

Of the 12 indicators that make up a nation’s Covid Resilience score, the biggest contributor to India’s rise in November was the reopening of its borders to vaccinated travelers from many places in the world. This put it in a group mostly comprised of Western developed economies that are welcoming back visitors.

The second driver for India’s jump is the increase in its flight capacity in November versus the same period in 2019, as people resumed business and leisure travel. Domestic travel traffic recovery had already been buoyant for a few months but with the addition of international flights, India is now in the top 10 for the Flight Capacity Recovery indicator.

While official cases still number in the thousands daily, its vast population means that India’s per capita infection rate is now just 23 per 100,000 people in November, almost as low as the Ranking’s November No. 1, the United Arab Emirates. 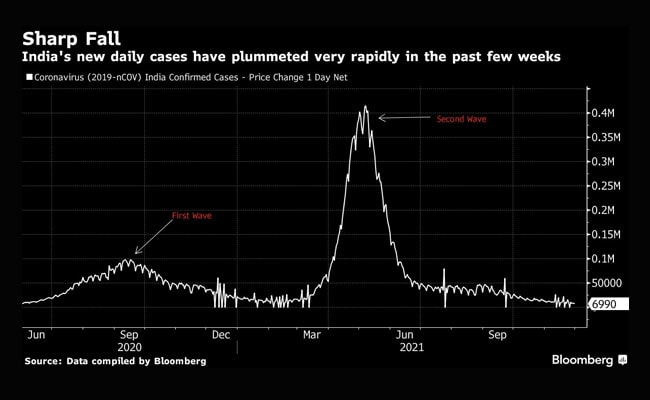 Blistering GDP growth expected in fiscal year 2022 of 9.5%, one of the highest in the world, also helped bolster its showing.

What does the situation on the ground look like now?

Pretty normal. Most restrictions across states, which oversee public health matters, have been eased in recent months after cases stayed low despite the country’s peak festival season.

Malls, schools, restaurants, cinemas and bars have reopened while many workplaces are prodding employees to return to work.

With the emergence of the omicron variant, Indian health-care authorities have re-imposed airport testing as well as home quarantine for fully-vaccinated visitors from places that have detected omicron cases. The country is yet to report a case of the newest variant, though scientists believe omicron is likely just going undetected so far.

What does India need to do to further improve its ranking?

India has a large number of people who have yet to get their second vaccine shot: only 32% of the total population is fully vaccinated. Anecdotally, health workers are struggling to get some residents in rural areas to return for the second dose, and under-18s, which make up a third of India’s population, are still ineligible for inoculation.

The country also struggles with patchy and inadequate genome sequencing, which means it can’t identify and track new variants fast enough. Prime Minister Narendra Modi’s government has been criticized for downplaying the early warning signs of delta’s existence before it was designated a variant of concern in May, allowing mass public gatherings to continue during state elections and religious events despite soaring infection rates.

The emergence of omicron, which has been identified in more than a dozen countries within a week of being sequenced, is re-igniting fears that India might again be too slow to respond to a new variant. Its high level of reopening means that any resurgence of the virus will spread more rapidly than in places where containment measures are still in place, a situation in which India’s fall down the Ranking would again be swift.

7 Chicken Kebab Recipes You Can Make In 30 Minutes