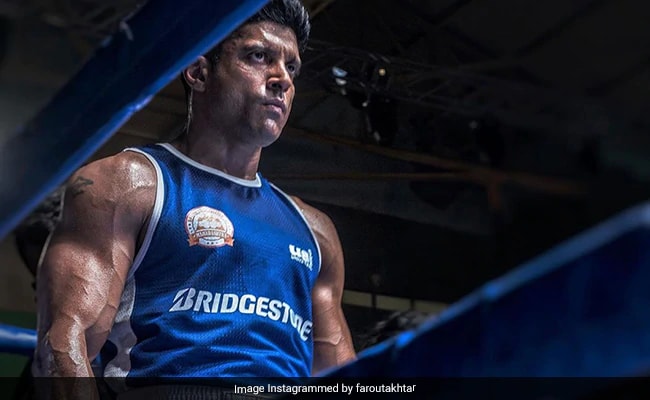 Salman Khan is the latest addition to the list of celebrities who gave a shout out to the recently-released teaser of Toofaan, which stars Farhan Akhtar in the lead role. The film that also features Mrunal Thakur and Paresh Rawal in pivotal roles, features Farhan Akhtar as a boxer. After Shah Rukh Khan, Hrithik Roshan and Parineeti Chopra, Salman Khan gave a loud cheer to the sports drama on Twitter. Sharing the film’s teaser, Salman Khan wrote: “Congrats Farhan teaser looks good.” Farhan’s The Sky Is Pink co-star Priyanka Chopra tweeted: “Congratulations Farhan! Your hard work is so evident. Lots of love.”

Congratulations Farhan
Your hard work is so evident. Lots of love @FarOutAkhtarhttps://t.co/Z5TQg3zTzu

“How amazing is this teaser! Packing a punch quite literally. Congratulations team, can’t wait to see this one,” wrote Alia Bhatt.

How amazing is this teaser!!!!
Packing a punch quite literally!!!

Sharing the Toofaan teaser on social media, Farhan Akhtar wrote on Friday, “It fills me with immense joy to give you the first glimpse of a film into which we poured all our love, passion, exuberance and madness. It truly is a labour of love and today I am so excited to share it with you. Here’s presenting the Toofaan teaser.” He added that the film will release on Amazon Prime Video on May 21.

Toofaan marks Rakeysh Omprakash Mehra and Farhan Akhtar’s second project together. Rakeysh earlier directed Farhan in the 2013 film Bhaag Milkha Bhaag, which was based on the life of legendary field sprinter Milkha Singh. The film will be co-produced by Ritesh Sidhwani, Farhan Akhtar.