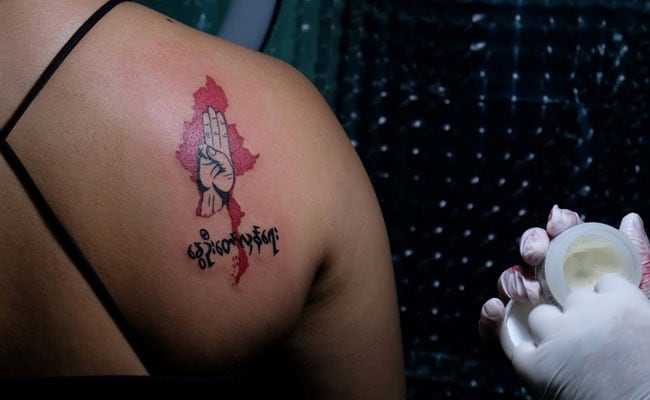 A woman displays a tattoo with a three-finger salute. (Reuters)

People in Myanmar protesting the military’s seizure of power, which has sparked widespread violence in the country, have a new tool – coup-themed tattoos.

Some are opting to have “Freedom from Fear” or “Spring Revolution” written on their bodies, while others favour drawings of ousted leader Aung San Suu Kyi’s face or the movement’s three-finger salute.

These motifs have become increasingly popular since the junta seized power on Feb. 1, tattoo parlours say. More than 80 people have been killed and 2,100 arrested in the crackdown by police and security forces on daily protests across the Southeast Asian nation, an advocacy group says.

“I felt like I lost my future when I heard the news on Feb 1. I feel so much in pain and I don’t want to get to forget that pain ever,” said a 23-year old woman at a parlour in Yangon, who did not want to be identified.

She said she was getting the message “Freedom from Fear” written on her body so she would never forget that pain and to show younger generations “how we got rid of this system.”

Many tattoo artists inked people for free in a show of solidarity in the days after the coup in early February. After reports that some of them were arrested, many parlours are trying to be more discreet even though they continue to offer steep discounts.

“They threatened us with the weapons. But our revolution won’t win if we have fear,” said the customer in Yangon. “So we must get rid of this kind of fear to prevail in our revolution.”

The leaders of the United States and some of its allies vowed on Friday to work together to restore democracy in Myanmar.