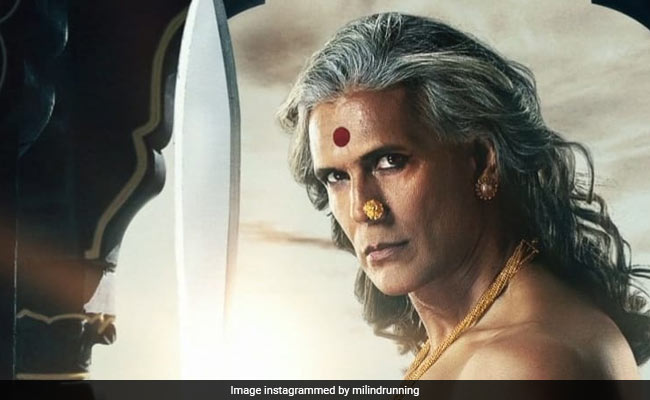 Milind Soman is back for yet another web-show – this time, for the much talked about Paurashpur, which will stream on OTT platforms Zee5 and ALT Balaji. Paurashpur was earlier described by the makers as a fictional historic kingdom, riddles with politics and gender wars. Sharing his first look from Paurashpur, Milind Soman gave an insight into his character’s soul – he plays the quick-witted Boris, who represents the “third gender” in Paurashpur. “Never played someone like this before! For the third gender in the world of Paurashpur, it has always been a power struggle!”

“A sharp mind and a charming personality; witness the many shades of love and the quick-wit of Boris, only in Paurashpur,” he added. In the first look poster, Milind Soman features in a gender-fluid look – the 55-year-old actor sports a huge nose-pin, a red bindi, black nail-paint and heavy gold jewellery. He also adds one more thing to his accessories – a sword.

Paurashpur also stars names such as Shilpa Shinde, Shaheer Sheikh, Sahil Salathia and Annu Kapoor in lead roles while actors such as Aditya Lal, Poulomi Das, Anant Joshi and Flora Saini feature in key roles. In a previously released teaser, Paurashpur was given this grand introduction: “The grand kingdom of Paurashpur: A kingdom of politics, conspiracies and gender wars where its people had nothing but a great dream to fulfil.”

Paurashpur is all set to stream on ZEE5 and ALT Balaji from December 29.