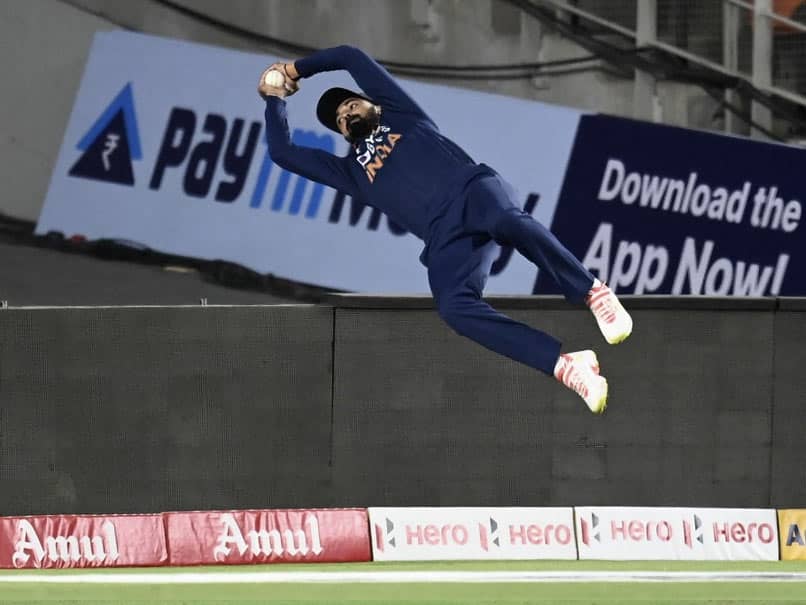 
KL Rahul failed to make an impact with the bat in the opening Twenty20 International (T20I) of the five-match series between India and England on Friday but the Indian batsman produced a stunning effort to deny Jos Buttler a certain six during England’s chase. While the visitors cantered to an eight-wicket win at the Narendra Modi Stadium in Ahmedabad, fans took to Twitter to praise Rahul for his sensational fielding on the boundary ropes. In the fourth over of England’s chase, Buttler came down the track to Axar Patel and lofted him over his head but didn’t get all of it. Rahul, who was stationed in the deep, dived backwards, caught the ball and before hitting the ground, threw the ball back into the field of play as England ran two.

Fans took to Twitter to salute KL Rahul for his brilliant effort.

The day and the match, however, belonged to England as the visitors easily chased down the paltry target of 125 in just 15.3 overs to take a 1-0 series lead.

England had won the toss, and elected to field.

Jofra Archer struck in the second over of the match as Rahul dragged a widish delivery back onto his stumps. India captain Virat Kohli fell in the next over to Adil Rashid, lobbing an easy catch to Chris Jordan at mid-off.

Things went from bad to worse as Shikhar Dhawan got out to a rash shot off Mark Wood to leave India tottering at 20 for three in five overs. Shreyas Iyer scored a fine half-century but India never really got on top of the England bowling and were retricted to 124 for seven in their 20 overs.

Jason Roy and Jos Buttler got the visitors off to a fast start. Buttler fell for 28 to Yuzvendra Chahal while Roy was dismissed by Washington Sundar for 49 but by that time the damage had been done.

Dawid Malan and Jonny Bairstow made sure England didn’t lose anymore wickets as they overhauled the target with 4.3 overs remaining.